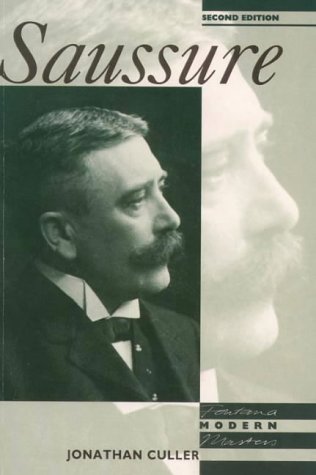 With Freud and Weber, Ferdinand de Saussure (1857-1913) is one of the seminal thinkers of the twentieth century. In the three courses of lectures that he delivered at the University of Geneva between 1907 and 1911, which were published posthumously from students’ notes as the 'Course in General Linguistics', he revolutionized the study of language and laid the foundations of modern linguistics.

But even more important are the implications of Saussure’s ideas for the social sciences. For in outlining a general science of signs, semiology, he provided a means of analyzing the systems of conventions which give significance to human behaviour.

In this revised edition of his acclaimed introduction to Saussure’s work and its place in modern thought, Jonathan Culler has made important additions, most significantly to his account of Saussurian ideas today in areas of critical theory such as Marxism, psychoanalysis and deconstruction.

“A book which will mould perceptions of the founder of structuralism for many years ahead.”
Times Higher Education Supplement

“A clear and concise exposition which is thoroughly accessible to non-specialists.”
Times Higher Education Supplement

“Highly readable...a model of what academic elucidation should be.”
New Society

“Culler has an uncanny talent for locating the pith of intellectual movements. Here, focusing on one book, the 'Cours de linguistique générale', he distils key points of Saussurean doctrine to their essence and recounts them with a lucidity that is unmatched and often startling. This revised edition differs from the 1976 edition in minor stylistic adjustments, an added survey of Saussure’s recent influences on Marxist theory and Lacanian psychoanalytic theory, and an expanded account of Derrida’s critiques... while the book should be used as a guide to an actual reading of the 'Cours', non-specialists (including undergraduates) who only read Culler can derive a basic appreciation of structuralism’s underpinnings and better prepare themselves to deal with post-structuralist transmutations.”
Modern Languages Journal