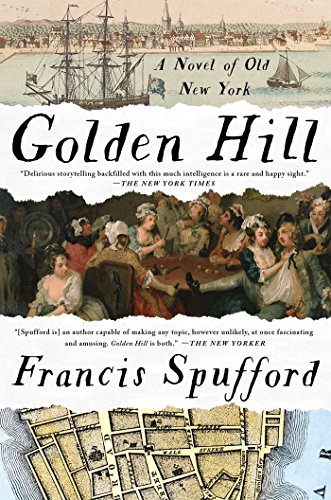 "Gorgeously crafted...Spufford's sprawling recreation here is pitch perfect." --Maureen Corrigan, Fresh Air "A fast-paced romp that keeps its eyes on the moral conundrums of America." --The New Yorker "Delirious storytelling backfilled with this much intelligence is a rare and happy sight." --The New York Times "Golden Hill possesses a fluency and immediacy, a feast of the senses...I love this book." --The Washington Post The spectacular first novel from acclaimed nonfiction author Francis Spufford follows the adventures of a mysterious young man in mid-eighteenth century Manhattan, thirty years before the American Revolution. New York, a small town on the tip of Manhattan island, 1746. One rainy evening in November, a handsome young stranger fresh off the boat arrives at a countinghouse door on Golden Hill Street: this is Mr. Smith, amiable, charming, yet strangely determined to keep suspicion shimmering. For in his pocket, he has what seems to be an order for a thousand pounds, a huge sum, and he won't explain why, or where he comes from, or what he is planning to do in the colonies that requires so much money. Should the New York merchants trust him? Should they risk their credit and refuse to pay? Should they befriend him, seduce him, arrest him; maybe even kill him? Rich in language and historical perception, yet compulsively readable, Golden Hill is a story "taut with twists and turns" that "keeps you gripped until its tour-de-force conclusion" (The Times, London). Spufford paints an irresistible picture of a New York provokingly different from its later metropolitan self but already entirely a place where a young man with a fast tongue can invent himself afresh, fall in love--and find a world of trouble.

"Francis Spufford has one of the most original minds in contemporary literature."
--Nick Hornby

"Francis Spufford has long been one of my favourite writers of non-fiction; he is now becoming a favourite writer of fiction as well. Golden Hill is a meticulously crafted and brilliantly written novel that is both an affectionate homage to the 18th century novel and a taut and thoughtful tale."
--Iain Pears

"I loved this book so much. Golden Hill wears its research with incredible insouciance and grace; a rollicking picaresque, it is threaded through with darkness but has a heart of gold."
--Jo Baker

"The intoxicating effect of Golden Hill is much more than an experiment in form. [Spufford] has created a complete world, employing his archivist skills to the great advantage of his novel ... This is a book born of patience, of knowledge accrued and distilled over decades, a style honed by practice. There are single scenes here more illuminating, more lovingly wrought, than entire books."
--Financial Times (UK)

"Like a newly discovered novel by Henry Fielding with extra material by Martin Scorsese. Why it works so well is largely down to Spufford's superb re-creation of New York ... His writing crackles with energy and glee, and when Smith's secret is finally revealed it is hugely satisfying on every level. For its payoff alone Golden Hill deserves a big shiny star."
--The Times (UK)

"Splendidly entertaining and ingenious ... Throughout Golden Hill, Spufford creates vivid, painterly scenes of street and salon life, yet one never feels as though a historical detail has been inserted just because he knew about it. Here is deep research worn refreshingly lightly ... a first-class period entertainment."
--Guardian (UK)

"One is drawn ineluctably into the world of colonial New York from the first sentence of Golden Hill. Wonderfully written and entertaining."
--Kevin Baker

"Marvelous. A vivid re-creation of colonial New York, in which the adventures of Mr. Smith, who may be a charlatan or a hero, make for a page turner, with an unexpected and unusually satisfying ending."
--C. J. Sansom

I've no history here, and no character: and what I am, is all in what I will be...