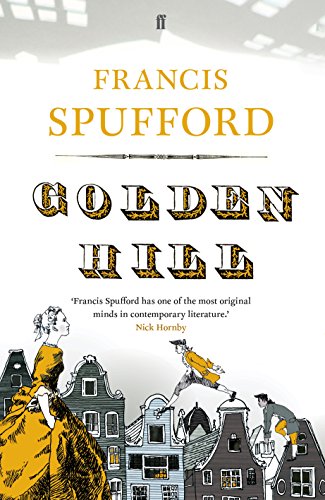 New York, a small town on the tip of Manhattan island, 1746.

One rainy evening in November, a handsome young stranger fresh off the boat pitches up at a counting-house door in Golden Hill Street: this is Mr Smith, amiable, charming, yet strangely determined to keep suspicion simmering. For in his pocket, he has what seems to be an order for a thousand pounds, a huge amount, and he won't explain why, or where he comes from, or what he can be planning to do in the colonies that requires so much money.

Should the New York merchants trust him? Should they risk their credit and refuse to pay? Should they befriend him, seduce him, arrest him; maybe even kill him?

As fast as a heist movie, as stuffed with incident as a whole shelf of conventional fiction, Golden Hill is both a novel about the 18th century, and itself a book cranked back to the novel's 18th century beginnings, when anything could happen on the page, and usually did, and a hero was not a hero unless he ran the frequent risk of being hanged.

This is Fielding's Tom Jones recast on Broadway - when Broadway was a tree-lined avenue two hundreds yards long, with a fort at one end flying the Union Jack and a common at the other, grazed by cows.

Rich in language and historical perception, yet compulsively readable, Golden Hill has a plot that twists every chapter, and a puzzle at its heart that won't let go till the last paragraph of the last page.

Set a generation before the American Revolution, it paints an irresistible picture of a New York provokingly different from its later self: but subtly shadowed by the great city to come, and already entirely a place where a young man with a fast tongue can invent himself afresh, fall in love - and find a world of trouble.

Quite marvellous. A vivid re-creation of colonial New York, in which the adventures of Mr Smith, who may be a charlatan or a hero, make for a page turner, with an unexpected and unusually satisfying ending. (CJ Sansom)

Francis Spufford has long been one of my favourite writers of non-fiction; he is now becoming a favourite writer of fiction as well. Golden Hill is a meticulously crafted and brilliantly written novel that is both an affectionate homage to the 18th century novel and a taut and thoughtful tale. (Iain Pears)

Fast, pacey and quite wonderful, I loved it. (Jenny Uglow)

I loved this book so much. Golden Hill wears its research with incredible insouciance and grace; a rollicking picaresque, it is threaded through with darkness, but has a heart of gold. (Jo Baker)

Most historical novels bring me out in hives, but not this one, which has erudition, panache and cunning. --(Adam Mars-Jones)

I knew from my previous experience of reading Francis Spufford that once I started I wouldn't be able to stop. And so it proved: Golden Hill slipped down like an oyster. A superb, gripping, and memorable novel. --(Adam Roberts)

I enjoyed it immensely . . . This is a very vivid evocation of New York City in the middle of the eighteenth century and the author really brings alive what was then a small provincial town in which the origins of the modern megalopolis can be glimpsed. The novel has an intriguing premise: A young Englishman arrives with, in effect, a cheque for an amount of money big enough to shake the economy of the colony. The author teases us with the mystery of whether it is authentic, why he has it, and what he wants it for. And the political and economic machinations that are unleashed are fascinating. The novel flirts with various narrative possibilities but constantly disconcerts the reader with an unexpected turn of events. It's a very good read and an impressive example of the historical imagination. --(Charles Palliser)

I've no history here, and no character: and what I am, is all in what I will be...