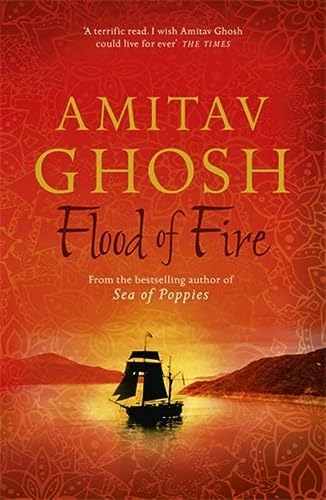 The thrilling climax to the Ibis trilogy that began with the phenomenal Booker-shortlisted Sea of Poppies.

It is 1839 and tension has been rapidly mounting between China and British India following the crackdown on opium smuggling by Beijing. With no resolution in sight, the colonial government declares war.

One of the vessels requisitioned for the attack, the Hind, travels eastwards from Bengal to China, sailing into the midst of the First Opium War. The turbulent voyage brings together a diverse group of travellers, each with their own agenda to pursue. Among them is Kesri Singh, a sepoy in the East India Company who leads a company of Indian sepoys; Zachary Reid, an impoverished young sailor searching for his lost love, and Shireen Modi, a determined widow en route to China to reclaim her opium-trader husband's wealth and reputation. Flood of Fire follows a varied cast of characters from India to China, through the outbreak of the First Opium War and China's devastating defeat, to Britain's seizure of Hong Kong.

Flood of Fire is a thrillingly realised and richly populated novel, imbued with a wealth of historical detail, suffused with the magic of place and plotted with verve. It is a beautiful novel in its own right, and a compelling conclusion to an epic and sweeping story - it is nothing short of a masterpiece.

A masterpiece . . . Flood of Fire is not just a work of literary imagination but also an exercise in deep and original historical reflection (Chris Clark, author of Sleepwalkers)

For the past weeks, [Amitav Ghosh] has been holed up in his Goa home, putting the finishing touches to Flood of Fire, the third part of his epic Ibis trilogy. The project has taken a decade. The three novels, starting with Sea of Poppies . . . have cemented his reputation (Financial Times)

As ever for Mr Ghosh, language is a great tumasher, and it is not surprising that he is on the shortlist for the biennial Man Booker International Prize . . . He swims with relish in a lexicon he has made his own, a rich brew of English, Bangla, Hindi, Parsi, Malay, Cantonese and pidgin at a time when free trade and imperialism were recombining Asian cultures and tongues . . . Mr Ghosh's genius is to paint this world from its teeming heart, rather than from the perspective of metropolitan centres of power in London, or, for that matter, Peking (The Economist)

It is a testimony to Ghosh's great skills that he can both teach us history and create believable fictional characters . . . What makes Ghosh's characters come alive all the more is the use of language . . . Ghosh, occasionally, translates, but often does not, yet pulls off this presentation of the medley of tongues his characters use with great aplomb (Mihir Bose Independent)

The final instalment of an extraordinary trilogy . . . Ghosh's story roars along, constantly flipping between high seriousness and low humour. It is simultaneously wrong-footing and delightful, riveting and diverting . . . His expansive trilogy has, in fact, advanced his story by only a few years; but the ground it has covered is almost immeasurable (Guardian)

Ghosh's scrupulous depiction of army life is just one part of this tour de force of historical description. Together, the novels are a weighty and precious chronicle of those times, a compendium of lost habits, languages and attitudes . . . Flood of Fire has all the romance, subterfuge and ingenious plotting to keep Ghosh's audience firmly lagowed. But it is the integrity of his historical vision that will ensure his books outlast other literary dumbpokes (FT Weekend)

The best bits of the trilogy, however, do not merely satirize the greed and hypocrisy of the foreign traders; but allow crosscurrents of sympathy . . . full of unforgettable vignettes (The Spectator)

A huge, sprawling, rumbustious novel . . . rich and engrossing . . . a splendid adventure story, full of rich and varied characters and romantic entanglements . . . In the last chapters Amitav Ghosh pulls the strings of his enthralling trilogy together. It's a remarkable achievement: an adventure novel full of feeling, but one which also invites - even compels - you to think about the assumptions which men act upon (Scotsman)

The star of the proceedings is the historical detail that really brings it all alive. Anyone who knows me knows my love of historical factoids and Amitav provides enough for us to luxuriate in them. The difference between the treatment of British and Indian soldiers, the colonial structure, the importance of China and the opium fields, not to mention the rituals surrounding taking opium - it's all here with much more besides, simultaneously entertaining and educating. I will definitely be going back to the beginning of the trilogy and look forward to catching up (Bookbag)

Amitav Ghosh was born in Calcutta and grew up in Bangladesh, Sri Lanka and India. He studied at the universities of Delhi and Oxford, has taught at a number of institutions and written for many magazines. The first novel in the Ibis trilogy, Sea of Poppies, was shortlisted for the Man Booker Prize in 2008.