Items related to Flood of Fire 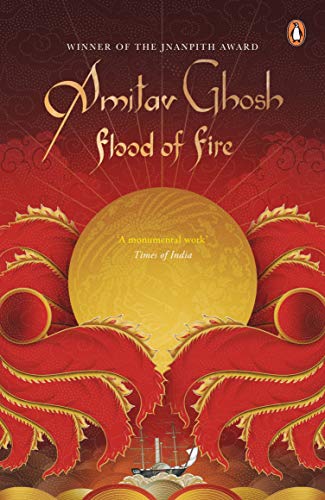 The thrilling climax to the Ibis trilogy that began with the phenomenal Booker-shortlisted Sea of Poppies It is 1839 and tension has been rapidly mounting between China and British India following the crackdown on opium smuggling by Beijing. With no resolution in sight, the colonial government declares war.One of the vessels requisitioned for the attack, the Hindu, travels eastwards from Bengal to China, sailing into the midst of the First Opium War. The turbulent voyage brings together a diverse group of travellers, each with their own agenda to pursue. Among them is Kesri Singh, a sepoy in the East India Company who leads a company of Indian sepoys; Zachary Reid, an impoverished young sailor searching for his lost love, and Shireen Modi, a determined widow en route to China to reclaim her opium-trader husband's wealth and reputation. Flood of Fire follows a varied cast of characters from India to China, through the outbreak of the First Opium War and China's devastating defeat, to Britain's seizure of Hong Kong.Flood of Fireis a thrillingly realised and richly populated novel, imbued with a wealth of historical detail, suffused with the magic of place and plotted with verve. It is a beautiful novel in its own right, and a compelling conclusion to an epic and sweeping story - it is nothing short of a masterpiece.

It is difficult to put in words the sheer engagement I experienced with this read. Amitava Ghosh is quite simply brilliant (such an overused word but in this case, apt). His research is meticulous and it is evident that much hard work has been expended in this. His ability to blend the his learnings into the stories is and its characters is marvellous. For those who have read the first 2 parts of the Ibis Trilogy (Sea of Poppies, River of Smoke), this book brings it all together. [If you have not read the previous 2 parts of the trilogy, you should do so before picking this one up] The year is 1939 and China has embargoed opium which has directly caused immense commercial loss to the British. It wouldn't be fair to give out any more to prevent any "loss of enjoyment" to the readers. The key characters here are Shireen, Zachary Reid and Kesri (Deeti's brother) and of course, several more who make this a compelling and enjoyable read. Sea of Poppies left me completely in awe and River of Smoke, in my book, made him the #1 IWE. Flood of Fire is on par with the other two. (I personally like the River of Smoke best of the lot) The canvas is vast, the story is detailed, the writing is superbly engaging. You can't go wrong with this one --Dylan Fan Jun 10, 2015

Author has the ability to create the reader's attention throughout the book and It is very book. I enjoyed reading this book which is on par with other books from the same author --Dr Somashekar Jul 1, 2015

Another enchanting and captivating novel from Amitava Ghosh. The IBIS trilogy has been one of the best books I have read. The amount of research and the way the story has been told is awesome. Infact while reading this novel I was transported to that era, the early 1800 India and south east Asia. Excellent. --Kaushik Chatterjee Jun 26, 2015

The final book in the bestselling Ibis trilogy from the author of Booker-shortlisted Sea of Poppies.