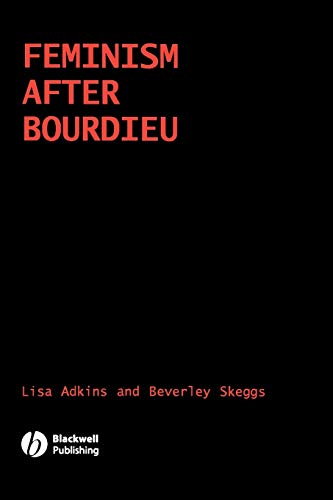 Contemporaries bemoan Pierre Bourdieu s ontology of what seems to be eternal reproduction. Yet this book shows that Bourdieu is more than ever relevant for twenty–first century feminism. The authors show how Bourdieu s notion of symbolic violence opens up a space of analysis of gendered power missed by the fashionable concepts of performativity. They point to the possibility of a gendered and relational phenomenology of the body that opens up vistas onto today s lived experience of gender. They bring Bourdieusian ideas of emotional capital and reflexivity into contemporary debates on affect. Bourdieu himself said that anybody can explain how things change, but that only his type of theory can explain how they stay the same. The feminist scholars that Adkins and Skeggs have brought together prove him wrong. They use the old master s concepts against the grain to throw light on the chronic mutations in what some call today s post–feminist condition.
Professor Scott Lash, Goldsmiths College, University of London.


A very interesting and valuable addition This collection manages to include a range of theoretical and empirical material, thoroughly demonstrating the place of feminism after Bourdieu. Network

"Feminism afer Bourdieu provides a variety of uses, reappropriations, criticisms, and expansions of Bourdieu′s social theory ... What is most satisfying is the refusal of the scholars to accept Bourdieu′s theory as–is and then struggle to work within it. They deomonstrate the possibility of critiquing and even rejecting a theory, yet nevertheless finding components of it useful for new thought, Both feminist scholars and sociologists should find this book helpful ... Hopefully the book can reinvigorate discussion about not only Bourdieu but other theorists who have been summarily dismissed due to failures in their theories to properly address sex and gender." APA Newsletter

"Now with the appearance of Feminism after Bourdieu, we are fortunate to have thanks to Lisa Adkins and Beverley Skeggs, an outstanding set of new contributions to the debate which promise not only to inform and enrich it, but also direct it into the future. In doing so, perhaps one of the significant achievements of this exemplary edited collection is to show us that seemingly opposed theoretical positions on Bourdieu′s legacy may in fact have more in common than might have been originally supposed ... Feminism after Bourdieu is without a doubt one of the best resources currently available to us for understanding the lifetime work of Pierre Bourdieu and its power and potential for recasting debates about gender in feminist thought. It is a work which is noteworthy for its highly innovative intellectual scope, and for the social and cultural theory fields in general ... immensely important and inspiring volume." British Journal of Sociology

For all his pre–eminence, Pierre Bourdieu had little to say about women or gender. Such an absence seems ultimately fatal. Yet as this volume amply demonstrates, the richness of his social theory can be opened up by contemporary feminism.


Feminism After Bourdieu comprises a series of interventions by key feminist thinkers. These reflect upon the legacies of Bourdieu to critique and critically extend his social theory. In addressing many of the most pressing issues of our time, they also help to develop contemporary issues for feminist theory.