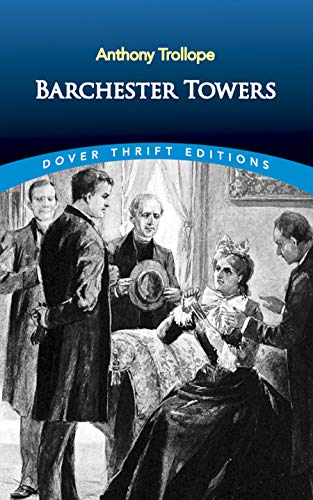 Thanks to the extraordinary storytelling gifts of Anthony Trollope, a tale of trifling power struggles among the clergy in a fictional cathedral town is transformed into a hilarious romp. One of the most popular of the prolific Victorian author's novels, Barchester Towers abounds in lively characterizations and ironic observations that combine comedy with keen social and psychological insights.

With talk too of a new film of Phineas Finn, Anthony Trollope looks like making a well-deserved comeback. Don t be deceived by the image of a bearded Victorian patriarch that comes to mind: listen to the first two chapters of the magnificent new Naxos recording of Barchester Towers, his most popular novel, and you will understand why John Henry Newman is said to have woken up laughing after falling asleep reading it, and why Alec Guinness never travelled without a Trollope novel. Trollope is one of our greatest comic novelists, as well as having an extraordinary talent for taking you confidentially and irresistibly into the flow of his story. Oblivious of the snail-like pace of Oxford's flood-impeded traffic, I was grinning from ear to ear as David Shaw-Parker explodes into the clerical indignation that follows Obadiah Slope s iconoclastic sermon in Barchester Cathedral. Abominable, groaned the dean. Abominable, muttered the meagre doctor. Abominable, re-echoed the chancellor, uttering a sound from the bottom of his deep chest. I really think it was, said Mr Harding. Proof positive that Trollope wrote with an ear to being read aloud. --Sunday Times 26/1/14

Shaw-Parker follows up his outstanding recording of The Warden (also available from Naxos) with an exceptional reading of the sequel, perhaps Trollope's most beloved novel. Romance vies with church politics as Archbishop Grantly battles against the new bishop and his smarmy assistant for control of religious life in Barsetshire. Shaw-Parker totally embraces his role as narrator, and in delightfully plummy tones, he guides listeners through the twisty plot, witty dialogue, and humorous asides. His animated portrayal of the large cast enlivens characters, from the poor pensioners to elite government officials. The narration highlights the strengths of this charming tale and, despite the novel's size, makes this a compelling listening experience. - --Joyce Saricks, Booklist

A new bishop arrives in the fictional cathedral town of Barchester, launching a comical battle for ascendancy among the local clergymen and their dependents. Dr. Proudie, the newly appointed bishop, brings two powerful allies: Mrs. Proudie, the outspoken power behind the ecclesiastical throne, and a scheming chaplain, the odious Obadiah Slope. Anthony Trollope's novel satirizes Anglican Church infighting during the 1850s between "low church" reformers and "high church" conservatives. Trollope's ironic observations and keen social and psychological insights combine to form a tale with timeless appeal.
There are many ways to approach the prolific Victorian author's 47 novels, and Barchester Towers is among the best as an introduction. The success of its predecessor, The Warden, inspired Trollope to return to Barchester for the next in what ultimately became a series of six related novels. Rich in humor, wisdom, and memorable characters, this volume offers a captivating portrait of provincial life in nineteenth-century England.
www.doverpublications.com