Items related to The Little Prince 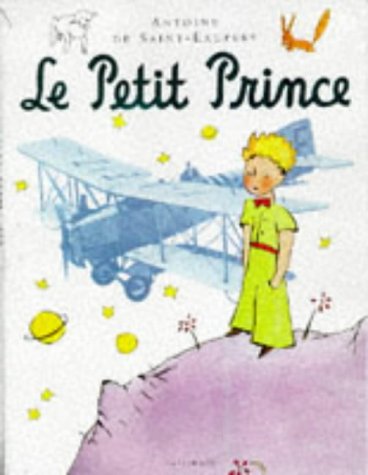 A classic parable about a pilot and a prince. When the pilot makes a forced landing in the Sahara Desert he meets the prince who tells him wise and enchanting stories.

You could be excused for thinking that this book is one containing a simple story for young children about a Little Prince. How wrong you would be! This is far from the truth: it is much more. It is a complex story containing lots of ambiguities about a child with golden hair. These are all eruditely discussed before the actual story begins, in a section entitled "How It All Began". "Is The Little Prince a story written for children or is it a meditation intended for adults?"

The Art of Living is discussed, along with a system of values, and the train of thought behind them is the unifying element. You are invited to "look at the book, and allow yourself to travel from one image to the next... " It was written and published more than 50 years ago in the USA, and the author was a Frenchman who illustrated the book himself; it was later translated by Kathryn Woods. The Little Prince is still very popular and has now been translated into many languages. Shortly after it was first written, the author died--disappearing together with his plane somewhere over the Mediterranean. This Gift edition contains all the original illustrations, plus some more original drawings that came to light later and have been published here for the first time.--Susan Naylor

I would like to recommend [...] the wonderful new translation by Ros and Chloe Schwartz of this modern classic.
--Francofil online forum

Buy Used
Condition: Very Good
The Little Prince This book is... Learn more about this copy

Book Description -. Hardcover. Condition: Very Good. The Little Prince This book is in very good condition and will be shipped within 24 hours of ordering. The cover may have some limited signs of wear but the pages are clean, intact and the spine remains undamaged. This book has clearly been well maintained and looked after thus far. Money back guarantee if you are not satisfied. See all our books here, order more than 1 book and get discounted shipping. Seller Inventory # 7719-9780434971237

Book Description Mammoth 01/09/1997, 1997. Hardcover. Condition: Very Good. Shipped within 24 hours from our UK warehouse. Clean, undamaged book with no damage to pages and minimal wear to the cover. Spine still tight, in very good condition. Remember if you are not happy, you are covered by our 100% money back guarantee. Seller Inventory # 6545-9780434971237

Book Description Mammoth, 1997. Hardcover. Condition: Used; Good. **Simply Brit** Shipped with Premium postal service within 24 hours from the UK with impressive delivery time. We have dispatched from our book depository; items of good condition to over ten million satisfied customers worldwide. We are committed to providing you with reliable and efficient service at all times. Seller Inventory # 1261900

Book Description Mammoth, 1997. Hardcover. Condition: Used; Good. **SHIPPED FROM UK** We believe you will be completely satisfied with our quick and reliable service. All orders are dispatched as swiftly as possible! Buy with confidence!. Seller Inventory # mon0001993154

Book Description Mammoth, 1997. Hardcover. Condition: Used; Very Good. Dispatched, from the UK, within 48 hours of ordering. Though second-hand, the book is still in very good shape. Minimal signs of usage may include very minor creasing on the cover or on the spine. Ripped/damaged jacket. The dust jacket of this book is slightly damaged/ripped, however, this does not affect the internal condition. Seller Inventory # CHL4968624

Book Description Mammoth, 1997. Hardcover. Condition: Used; Good. Dispatched, from the UK, within 48 hours of ordering. This book is in good condition but will show signs of previous ownership. Please expect some creasing to the spine and/or minor damage to the cover. Aged book. Tanned pages and age spots, however, this will not interfere with reading. Damaged cover. The cover of is slightly damaged for instance a torn or bent corner. Seller Inventory # CHL5388543

Book Description Hardback. Condition: Very Good. The book has been read, but is in excellent condition. Pages are intact and not marred by notes or highlighting. The spine remains undamaged. Seller Inventory # GOR001416567