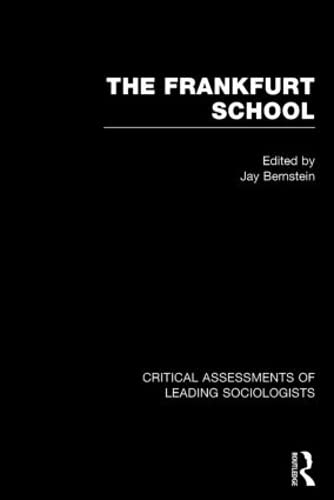 First published in 1995. Routledge is an imprint of Taylor & Francis, an informa company.

The Frankfurt School refers to the members associated with the Institut f r Sozialforschung (Institute for Social Research) which was founded in Frankfurt in 1923. The work of this group is generally agreed to have been a landmark in twentieth century social science. It is of seminal importance in our understanding of culture, progress, politics, production, consumption and method. This set of 6 volumes offers the definitive guide to the work and influence of the School. All of the major figures - Adorno, Horkheimer, Marcuse and Benjamin - are represented. But the collection also covers the work of many of the minor figures associated with the School who have until now been unfairly neglected. The volumes provide a full picture of the School by examining the important developments that have occurred since the deaths of the original core of Frankfurt scholars. In particular the work of Jurgen Habermas is fully assessed. The collection has been assembled with the advice of many of the leading contemporary commentators on the history and significance of the Frankfurt School. The editor, Professor Jay Bernstein, is himself, a noted scholar of critical theory.

The result is the world's most complete survey and interpretive guide to the oeuvre of the Frankfurt School. About the Author: