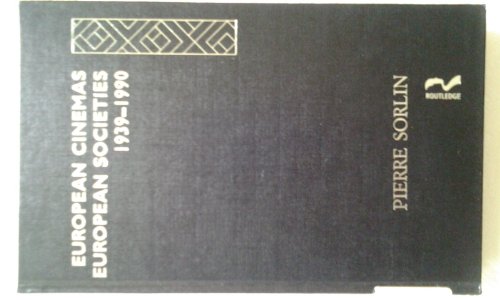 First published in 2004. Routledge is an imprint of Taylor & Francis, an informa company.

"Refreshingly direct and sprightly in tone, this is also the most comprehensive and convincing book I know on modern European film."
-Dudley Andrew

In "European Cinemas, European Societies, 1939-1990", Pierre Sorlin examines the European cinema as a whole, its public and its productions. As far as the individual films are concerned, three players have been taken into account: the Americans, European audiences and film makers. After examining the contrasting attitudes of the European cinemas on the eve of the World War 2, Sorlin focuses on an important political issue - the resistance to Nazism, and why European cinema could never deal seriously with the rise of fascism. He then looks at the spectators' and film-makers' response to Hollywood, shows why audiences declined, explains how cultural individuality has been expressed in film, and analyzes the reasons why cinema survived the desertion of picture-houses. Finally Sorlin turns his attention to a comparative examination of some of the main themes depicted in films, such as urbanization, history, immigration, sex and gender.