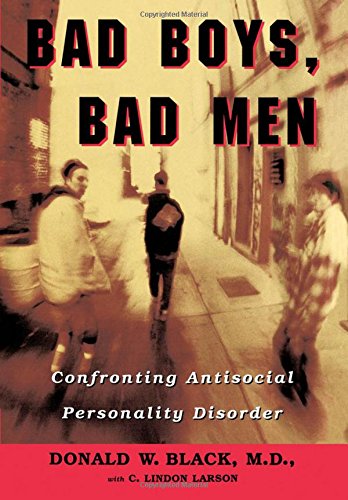 Whether called black sheep, sociopaths, felons, conmen, or misfits, some men break all the rules. They shirk everyday responsibilities, abuse drugs and alcohol, take up criminal careers, and lash out at family members. In the worst cases, they commit rape, murder, and other acts of extreme violence as though they lack a conscience. What makes these men - men we all know, whether as faces from crime reports or as people close to us - behave the way they do? Bad Boys, Bad Men examines the mysterious mental condition that underlies this lifelong penchant for bad behaviour. Psychiatrist and researcher Donald W. Black, M.D., draws on case studies, scientific data, and current events to explore antisocial behaviour and to chart the history, nature, and treatment of a misunderstood disorder that effects up to seven million Americans. Black shows that the condition psychiatrists call antisocial personality disorder, or ASP, is not a myth but a very real problem that causes more pain to individuals and society than many commonly recognized psychiatric illnesses. New evidence from genetics and neuroscience supports the long-held notion that extreme cases of antisocial behaviour are tied to biologic causes and that some people are simply born bad. Bad Boys, Bad Men summarizes recent advances in genetics, brain imaging and psychophysiologic research that shed light on ASP. The disorder's impact spans every society and is linked to a host of social problems, including crime, domestic violence, drug abuse, and neglected children. Black argues that any attempt to counter these problems requires confronting ASP and that some of today's high-profile crimincal cases may be rooted in this perplexing disorder. In Bad Boys, Bad Men Black describes the warning signs that predict which troubled children are more likely to become dangerous adults. The books details the slow progress towards treatment for ASP, discusses the role of the criminal justice system in dealing with the disorder, and offers advice for individuals and families affected by it. Drawing on the author's research into the progression of ASP, Bad Boys, Bad Men introduces people like Ernie, the quintessential juvenile delinquent who had an incestuous relationship with his mother and descended into crime and alcoholism; Ed, the charming con man whoe wealthy parents tried to bail him out at every turn; Paul, an exhibitionist who sex offenses were only the beginning of his problems; and John Wayne Gacy, the notorious serial killer whose lifelong pattern of misbehaviour escalated to the rape and murder of more than 30 young men and boys. These compelling cases read like medical detective stories, as Black tries to separate the lies these men tell from the facts of their lives. For people with ASP, life becomes an opportunity to grab what they can without remorse or concern for the consequences of their actions. In depicting the antisocial personality, Bad Boys, Bad Men underscores the fundamental human need for conscience and social order. Though Bad Boys, Bad Men is written for general audience, its summary of the psychiatric literature makes it suitable for readers already familiar with the topic. It will be of interest to psychiatrists, psychologists, criminologists, social workers, victims of crime and domestic abuse, and anyone else interested in understanding social behaviour.

Whether called a Black Sheep, sociopaths, felons, conmen or misfits, some men break all the rules. In the worst cases, they commit rape, murder, and other acts of extreme violence, as if they did not have a conscience. What makes these men behave the way they do is the purpose of Black's book.

"My goal," writes Donald Black, at the beginning of Bad Boys, Bad Men "is to educate readers about a serious but underappreciated health problem." This is the core of the book: an attempt to identify and describe a psychiatric disorder that goes undiagnosed in the vast majority of cases of anti-social men. Based on the study of men treated at the University of Iowa Psychiatric Hospital between 1945 and 1970, Bad Boys, Bad Men explores the connection between conduct disorder in boys and the chaotic lives of the men Black describes as "anti- social". The key to that connection is pattern: the anti-social does not break the occasional social rule but lives in a state of constant resistance to authority and norm--with predictable results in terms of economic, psychological and emotional poverty. Cautious when it comes to causes--some combination of gene and environment is proposed--Black is clear that the crucial predictor of ASP is conduct disorder in childhood. Aiming at the general reader, as well as professionals, he traces the common themes of ASP through his subjects' lives: chaotic childhoods, abuse, unemployment, addiction, violence and, sometimes, murder. More problematically, he supports the topical claim that ASP is a "lurking threat" to the fabric of cultural life through a wide range of high-profile cases of violence and murder: among others, Saddam Hussein, O.J. Simpson, John Gacy. But are these men really comparable? And how do you start to separate ASP as a specific disorder from the apparent prevalence of ASP symptoms?: that's the problem, and challenge, of this contribution to the study of criminal behaviour. --Vicky Lebeau