Items related to Birds and Other Plays (Oxford World's Classics) 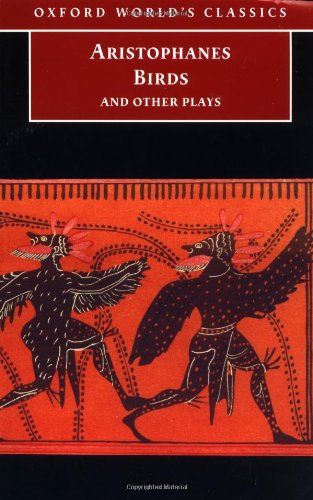 BIRDS AND OTHER PLAYS [ LYSISTRATA / ASSEMBLY-WOMEN / WEALTGH ] by ARISTOPHANES. Translated with an introduction and notes by STEPHEN HALLIWELL. Published by OXFORD WORLD CLASSICS . Paperback. Condition: Acceptable/Good. Under-linings and annotations on several pages.

Aristophanes is the only surviving representative of Greek Old Comedy, the exuberant, satirical form of festival drama which flourished during the heyday of classical Athenian culture in the fifth century BC. His plays are characterized by extraordinary combinations of fantasy and satire, sophistication and vulgarity, formality and freedom. Birds is an escapist fantasy in which two dissatisfied Athenians, in defiance of men and gods, bring about a city of birds, the eponymous Cloudcuckooland. In Lysistrata the heroine of the play organizes a sex-strike and the wives of Athens occupy the Akropolis in an attempt to restore peace to the city. The main source of comedy in the Assembly-Women is a similar usurpation of male power as the women attempt to reform Athenian society along utopian-communist lines. Finally, Wealth is Aristophanes' last surviving comedy, in which Ploutos, the god of wealth is cured of his blindness and the remarkable social consequences of his new discrimination are exemplified.This is the first complete verse translation of Aristophanes' comedies to appear for more than twenty-five years and makes freshly available one of the most remarkable comic playwrights in the entire Western tradition, complete with an illuminating introduction including play by play analysis and detailed notes.

Little is known about Aristophanes' life (c. 445BC-c.386BC) but there is a portrait of him in Plato's SYMPOSIUM. He had his first comedy produced when he was 20 and wrote 40 plays in all. David Barrett has translated a number of ancient Greek texts for Penguin Classics.