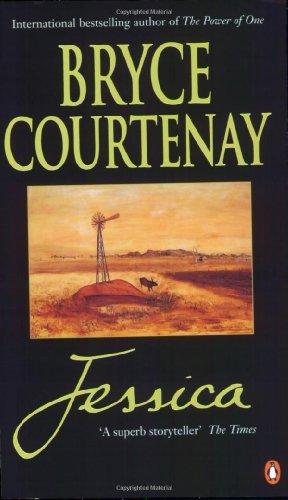 Based on the life of a young Australian woman who defied the conventions of her time. She had a stubborn streak and the courage to act out her convictions, in spite of the consequences. This story describes her personal fight for justice against odds, and a testimony to the power of the human spirit to triumph over adversity.

In Jessica, award-winning author Bryce Courtenay, tells the tragic yet inspirational story of a woman living on the black soil plains of South Western Australia during the early 20th century.

As the son her father never had, Jessica's pleasure in life comes from helping him out on the farm. However, her preference and obvious flare for "men's work" leads to her ostracism both at home and in the fields. She finds that "neither sex will have her as she is, and both seem to want to punish her for being too much of the other." While the bond between Jessica and her father is very close, her mother detests her unladylike ways but cherishes her older sister, Meg, whose sole pursuit is to snare a rich husband. The mercenary duo has their sights set on one man in particular, wealthy Jack Thomas. When Jessica poses an obstacle to this match by inspiring Jack's love, her mother reveals the terrifying extent of her capacity for evil, culminating in an ultimate act of betrayal. Having endured unimaginable loss and isolation, Jessica cultivates friendships with others who have suffered discrimination and goes on to fight for the rights of the aboriginal people.

Based on a true-life story, this amazing book chronicles the most abhorrent forms of injustice and persecution. Tragedy strikes quite early and sets the pace for the devastating turn of events that follow. Throughout, the raw, unyielding landscape mirrors the harsh personalities of those who live on its soil: "The land, the dust and heat and floods and drought, everything lives off everything else, death and destruction everywhere." --Neelam Dongha