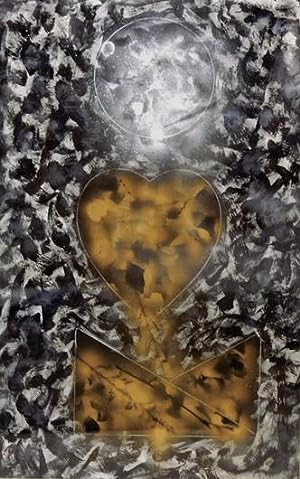 An original Burroughs painting, which became part of the Seven Deadly Sins exhibition at The Writer's Place, Kansas City, Missouri, in 1993. Acrylic and spray paint on poster board: a gold triangle and heart spray-painted against a background acrylic image of black, blue and gray. Signed by Burroughs. 20" x 32". Mounted and framed to 24" x 36". Fine. Burroughs, whose Naked Lunch, Soft Machine, and numerous other works helped define the Beat generation and redefine the psychedelic novel, also worked in the visual media from the early 1950s on, experimenting first with collages and later with what he called "nagual art" -- art infected by chance, which had the possibility of giving the viewer access to what Burroughs called a "port of entry," an access to a different universe or a different way of seeing our own. In writing, Burroughs adopted the "cut-up" technique, with Brion Gysin, to achieve similar ends: a final product that was, in part, a product of chance or, at the very least, forces beyond the artist's direct control and manipulation. Seller Inventory # 024825


All books are First Editions or First American Editions in dust jackets unless otherwise noted and are returnable within 30 days.

Institutions can be billed.


Insurance is included. Shipping costs are based on books weighing 2.2 LB, or 1 KG. If your book order is heavy or oversized, we may contact you to let you know extra shipping is required.