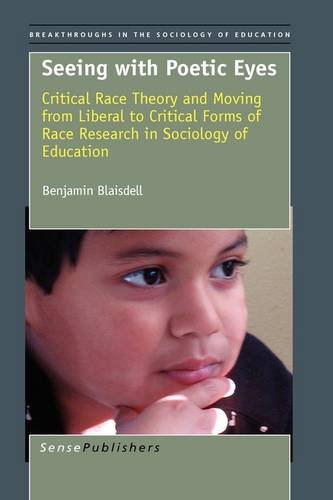 "Seeing with poetic eyes" is a phrase used by a teacher to describe one of his students, a teenager who could recognize the disconnect between U.S. society's claims about racial equity and its actual commitment towards that equity. As a teacher, he saw it as his mission to help all of his students see the world in such a critical way with that hope that they would be motivated to pursue antiracism more actively in their lives. In this book, I discuss how critical race theory (CRT) can motivate research on race in sociology of education in a similar way. Specifically, I describe how CRT helped me work with seven white teachers on developing more critical understandings of race. In my ethnographic interviews with these teachers, the analytical tools of CRT gave me a way to openly dialogue with them about issues of race in education. I was able to not only learn from the teachers but also work with them on developing racial awareness. Instead of relying on more liberal forms of sociological research-where the researcher extracts data from participants-CRT helped me promote a more critical approach, one where the researcher and participants work together to actively pursue antiracism in the research act itself. So "seeing with poetic eyes" refers the way that I have come to view research as a means of antiracism. Similarly, I propose that CRT can promote such a critical approach to research on race in the field of sociology of education.

1. Seeing with Poetic Eyes: Critical Race Theory and Moving from Liberal to Critical Forms of Race Research in Sociology of Education

Book Description Sense Pub 2009-03-30, 2009. Paperback. Condition: Good. Item is in good condition. Some moderate creases and wear. This item may not come with CDs or additional parts including access codes for textbooks. Might be an ex-library copy and contain writing/highlighting. Seller Inventory # DS-9087907729-3