Items related to Summit of the Gods Vol.3

Summit of the Gods Vol.3 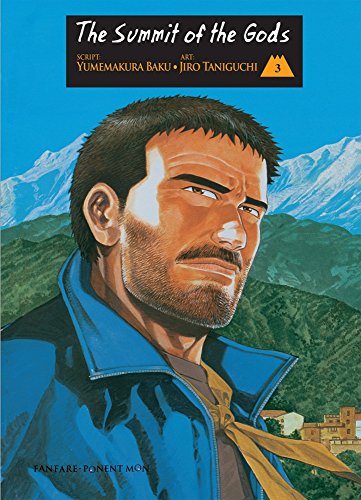 On his third Everest expedition in June 1924, George Mallory and his climbing partner Andrew Irvine disappeared on the North-East ridge during their ascent - having been sighted only a few hundred metres from the summit. Makoto Fukamachi, photographer and mountaineer, continues his search for Habu Joji and the camera which could hold the secret to Mallory's attempt. His quest takes him high into Nepal to the town of Namche Bazar, capital of Sherpa country. Taniguchi's realistic art and Baku's timeless script will take readers to the heights mountaineers can only dream of.

Jiro Taniguchi was born 1947 in Tottori, Japan. He trained in the 60's and debuted in 1971 in 'Young Comic'. During the 70's he worked with author Natsuo Sekikawa before launching into their massive work 'The times of Botchan' in the 80's. The 90's saw many solo works including the prize winning 'A Distant Neighborhood'. The new millenium saw Taniguchi's epic adaptation of Baku Yumemakura's novel 'The Summit of the Gods' into a 1500 page manga. He continues to live and work in Japan.

Book Description FANFARE, United States, 2012. Paperback. Condition: New. Translation. Language: English. Brand new Book. EVEREST'S MYSTERY. Far higher in the sky than imagination had dared to suggest, the white summit of Everest appeared. - George Mallory. In 1924 Mallory and Irvine vanished on Everest's North-East ridge, leaving behind them the mystery of who was first to reach its summit. There was a camera that could provide the solution. Tsuneo Hase has died in an avalanche attempting to climb K2 solo without oxygen, leaving Jouji Habu alone to face the next big challenge, but what would it be? Habu has disappeared in Nepal, as has the camera that may unlock Everest's mystery, so Japanese photographer Fukamachi has to search anew for the man known as 'Venomous Snake' and he draws on an unexpected source for help. Taniguchi's realistic art and Baku's tireless script will take you to such heights that mountaineers can only dream of. Seller Inventory # AAT9788492444335