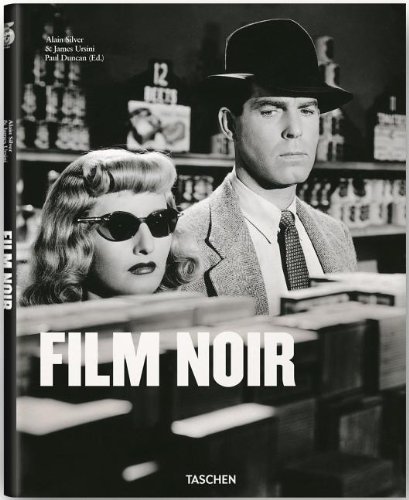 Shadows and smoke Classic noir flicks of the 1940s-50s, illustrated and examined. Beginning with a general overview of film noir and covering its most important themes chapter by chapter (lovers plan murder, corrupt police, doomed love, psychological noir, etc.), this copiously illustrated handbook provides instant and in-depth access to the film noir genre for amateurs and aficionados alike. Among the films covered are these "top ten": "Double Indemnity", "Kiss Me Deadly", "Gun Crazy", "Criss Cross", "Detour", "In A Lonely Place", "T-Men", "Out of the Past", "The Reckless Moment", and "Touch of Evil".

Paul Duncan has edited 50 film books for TASCHEN, including the award-winning The Ingmar Bergman Archives, and authored Alfred Hitchcock and Stanley Kubrick in the Film Series. Film producer, critic and historian Alain Silver is the author of 20 books on cinematic topics, including The Noir Style, LA Noir, the Film Noir Reader series, and Steve McQueen, Frank Sinatra, and Katharine Hepburn for TASCHEN's Icon series. His audio commentaries on classic film noir DVDs include Call Northside 777 and Double Indemnity. A member of the Directors Guild of America, the Screen Actors Guild, and the Writers Guild of America, he graduated from UCLA with degrees in film production and critical studies. James Ursini has co-written eleven books with Alain Silver, including their Film Noir Reader series, which established them as two of the foremost authorities on film noir. Ursini has also written for various film magazines and supplied the commentary for numerous classic film noir DVDs. He has a doctorate in motion pictures studies and lectures on filmmaking in the Los Angeles area.