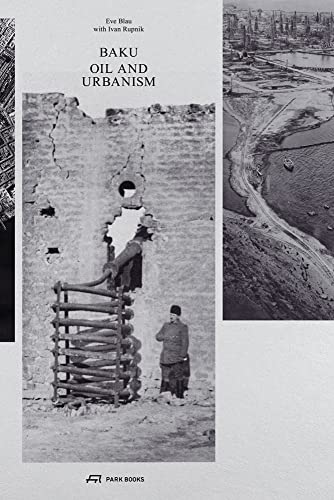 Baku, the capital of Azerbaijan and formerly part of the Russian Empire and the Soviet Union, is a city built on and with oil. In fact, oil and urbanism in Baku have been completely intertwined, economically, politically, and physically in the spaces of the city.

Its first oil boom in the late 19th century was driven by the Russian branch of the Nobel family modernising the exploitation of oil fields around Baku, and local oil barons pouring their new wealth into building a cosmopolitan city centre. During the Soviet period, Baku became the site of an urban experiment: the shaping an oil city of socialist man. This project included Neft Dashlari, a city built on trestles in the Caspian Sea, housing thousands of workers, schools, shops, gardens, clinics, cinemas and more. This first off-shore rig in the world became the emblem of Baku's second oil boom. Today, Baku is experiencing its third oil boom. For Baku's city planners and business elites, that future is based on a careful reading of Baku as a project in which urbanism and oil are inextricably linked.

This new book investigates how oil stimulated urban development in Baku, and explores in detail the more complex and important question of how the disparate spatial logics, knowledge bases, and practices of oil production and urban production intersected, impacted and transformed one another. Based on a vast research project and drawing on rich and previously unpublished material, Baku - Oil and Urbanism is organised into three broadly conceived historical periods defined by the political, economic, technological conditions in which the interwoven evolution of oil and urban production unfolded. The book also features a new photo essay by celebrated photographer Iwan Baan.

Eve Blau is a professor at Harvard Graduate School of Design. She has previously been Curator of Exhibitions and Publications at the Canadian Centre of Architecture CCA in Montreal. Ivan Rupnik teaches as an associate professor at the Northeastern University's College of Arts, Media and Design in Boston.

Baku: Oil and Urbanism is the first architectural study of the relationship between oil and urbanism. Its focus is Baku, the capital of Azerbaijan and formerly part of the Russian Empire and Soviet Union. Since the late 19th century, oil and urbanism have been intertwined in the spaces of the city. Later, Baku was the site of one of the most spectacular experiments in Soviet urban and infrastructural design ---Neft Dashlari, - the first off-shore drilling facility in the world, a city built on trestles in the Caspian Sea. Today, Baku is undergoing its second major oil boom. The book examines how urban design, planning, and architecture have dealt with the issue of oil in varying political conditions.