Items related to Do Markets Corrupt Our Morals?

Do Markets Corrupt Our Morals? 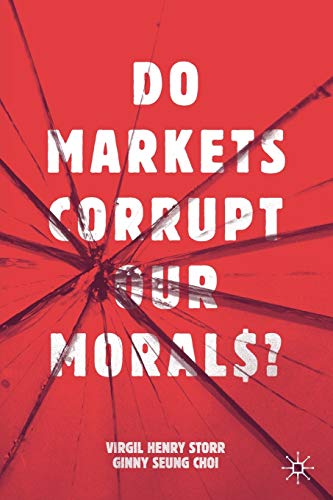 The most damning criticism of markets is that they are morally corrupting. As we increasingly engage in market activity, the more likely we are to become selfish, corrupt, rapacious and debased. Even Adam Smith, who famously celebrated markets, believed that there were moral costs associated with life in market societies.

This book explores whether or not engaging in market activities is morally corrupting. Storr and Choi demonstrate that people in market societies are wealthier, healthier, happier and better connected than those in societies where markets are more restricted. More provocatively, they explain that successful markets require and produce virtuous participants. Markets serve as moral spaces that both rely on and reward their participants for being virtuous. Rather than harming individuals morally, the market is an arena where individuals are encouraged to be their best moral selves. Do Markets Corrupt Our Morals? invites us to reassess the claim that markets corrupt our morals.

“Storr and Choi ask: Do markets corrupt our morals? Their answer supports two propositions: (1) If there is no morality there can be no markets; (2) Markets enable liberalism and people to flourish.” (Vernon L. Smith, Professor of Economics and Law, Chapman University; 2002 Nobel Laureate in Economics)

“Even self-proclaimed socialists grudgingly concede that economic markets are productive. However, they set participants against each other, rely entirely on self-interest rather than community, reward greed, and generally elevate money over virtue. About the best that can be said for them is that they can serve as the cash cow allowing massive redistribution.If this is the common wisdom, then Storr and Choi offer an uncommon corrective. They argue along several pathways that markets buttress virtue, promote sociability, bring out the brighter lights of our nature. That is, economic society isn’t just instrumentally worth holding on to but makes us better people. With carefully curated evidence and lucid explanation, Do Markets Corrupt our Morals? demonstrates that neither economic society nor economics deserves its reputation as dismal.” (Loren E. Lomasky, Cory Professor of Political Philosophy, Policy & Law, University of Virginia; author of Persons, Rights and the Moral Community)

“The collapse of Lehman Brothers in 2008 was a catastrophe in itself, and a symptom of something bigger. We came to see our financial markets as an orgy of greed. But why 2008? It is not as if that was the year when greed was invented. So, what transformed an omnipresent germ of greed into 2008’s flesh-eating superbug? What new policy goals and new financial instruments taught people to think that the aim of investing is to “get rich quick” rather than to build a long-term portfolio of cautiously balanced risk? Storr and Choi understand that 2008 was not humanity’s first crisis; neither will it be the last. But why do some economies recover, while chaos and poverty seem endemic in other economies? What establishes and sustains the moral foundations of thriving market societies?” (David Schmidtz, Kendrick Professor of Philosophy; author of The Elements on Justice)

“Virgil Storr and Ginny Choi jump with both feet into a centuries old debate on whether the market economy while delivering us material progress does so at the cost of corrupting our moral sense. Do Markets Corrupt Our Morals? sets out to weigh the various sides of the arguments and in this carefully reasoned book they bring conceptual clarity and empirical analysis to a topic too often marred by conceptual confusion and empirical vacuousness. It is an engaging read from start to finish, and a work vitally needed for our times. Storr and Choi have produced a must-read book for scholars across the social sciences and the humanities and provide us with the necessary starting point for a productive conversation on markets and morality.” (Peter J. Boettke, University Professor of Economics and Philosophy; author of Living Economics: Yesterday, Today, and Tomorrow)

“This is a lively, original and timely book. Turning the standard arguments against markets on their head, Storr and Choi stress the educational function of markets. Where democracy relies upon the idea of "ruling and being ruled in turn," markets encourage the ideal of "serving others and being served in turn." Markets thus are mutually beneficial not only in a material sense. Markets are also morally mutually beneficial, encouraging virtue on the part of individuals and strengthening cooperative bonds across communities as a whole. This is a deeply humane study of markets. May it be widely read!” (John Tomasi, Romeo Elton Professor of Natural Philosophy, Brown University; author of Free Market Fairness)

“The common sentiment regarding markets is that they bring out the worst in people by rewarding and reinforcing selfish if not corrupt behavior. As Storr and Choi argue in this insightful, important, and timely book, not only does the market coexist with morality, it actively promotes it, supporting and enhancing our participation in our communities and creating a more prosperous society in terms of virtue as well as wealth.” (Mark D. White, chair of the Department of Philosophy, College of Staten Island/CUNY; editor The Oxford Handbook of Ethics and Economics)

“Storr and Choi have brought economics and politics back to ethics, which should never have been left. Of course values matter. Of course markets smooth off the rough sides of humans. Of course ‘sweet commerce’ reigns, and should. Of course. But it took a brilliant book like this one to show it.” (Deirdre N. McCloskey, author of The Bourgeois Virtues: Ethics for an Age of Commerce)

Virgil Henry Storr is Associate Professor of Economics at George Mason University and the Don C. Lavoie Senior Fellow in the F.A. Hayek Program in Philosophy, Politics and Economics at the Mercatus Center.

Ginny Seung Choi is Associate Director of Academic & Student Programs; a Senior Fellow in the F.A. Hayek Program for Advanced Study in Philosophy, Politics and Economics; and a Senior Research Fellow at the Mercatus Center at George Mason University. Previously, she was an Assistant Professor of Economics at Saint Vincent College.

1. Do Markets Corrupt Our Morals?

3. Do Markets Corrupt Our Morals?

4. Do Markets Corrupt Our Morals? (Paperback or Softback)

5. Do Markets Corrupt Our Morals?

6. Do Markets Corrupt Our Morals?

7. Do Markets Corrupt Our Morals?

8. Do Markets Corrupt Our Morals?

9. Do Markets Corrupt Our Morals?

10. Do Markets Corrupt Our Morals?