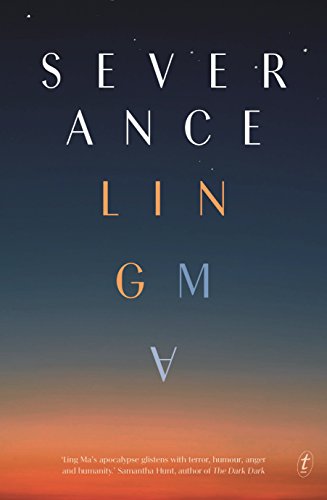 Candace Chen, a millennial drone self-sequestered in a Manhattan office tower, is devoted to routine: her work, watching movies with her boyfriend, avoiding thoughts of her recently deceased Chinese immigrant parents. So she barely notices when a plague of biblical proportions sweeps the world. Candace joins a small group of survivors, led by the power-hungry Bob, on their way to the Facility, where, Bob promises, they will have everything they need to start society anew. But Candace is carrying a secret she knows Bob will exploit. Should she escape from her rescuers? A send-up and takedown of the rituals, routines and missed opportunities of contemporary life, Severance is a moving family story, a deadpan satire and a heartfelt tribute to the connections that drive us to do more than survive.

'In the end, Severance isn't so much a story about zombies as it is an imaginative critique of capitalism. Underneath Ma's deadpan comedy lie shrewd observations of the West and the decadence of our everyday existence.' Paris Review

'Ma's writing about the jargon of globalised capitalism has a mix of humour and pathos that reminded me a little of Infinite Jest and a little of George Saunders; it produced a sense of estrangement from my cosmetics, my clothes, and my iPhone. I finished it feeling sad and sensitive to the garbage all around us that comes at such a high cost to planetary and human welfare.' The New Yorker

'Severance is the most gorgeously written novel I've read all year; when I finished it, I immediately picked it up and read it all over again.' New Republic

'This is a biting indictment of late-stage capitalism and a chilling vision of what comes after, but that doesn't mean it's a Marxist screed or a dry Hobbesian thought experiment... Ma also offers lovely meditations on memory and the immigrant experience. Smart, funny, humane, and superbly well-written.' Kirkus Reviews, starred review

'Ma's language does so much in this book, and its precision, its purposeful specificity, implicates an entire generation. But what is most remarkable is the gentleness with which Ma describes those working within the capital-S System. What does it mean if a person finds true comfort working as a "cog" in a system they disagree with? Is that comfort any less real?' Buzzfeed, #1 Summer Read Pick

'In this shrewd postapocalyptic debut, Ma imagines the end times in the world of late capitalism, marked by comforting, debilitating effects of nostalgia on its characters...The novel's strength lies in Ma's accomplished handling of the walking dead conceit to reflect on what constitutes the good life. This is a clever and dextrous debut.' Publishers Weekly

'A fierce debut from a writer with seemingly boundless imagination... It's a stunning, audacious book with a fresh take on both office politics and what the apocalypse might bring: This is the way the world ends, Ma seems to be saying, not with a bang but a memo.' NPR

'It's a stunning book. I devoured Severance in as close to a single sitting as possible... and it shook me on an emotional level that no other apocalyptic novel has reached.' Chicago Review of Books

'It's a novel that sneaks up on you from all sides: it's an affecting portrayal of loss, a precise fictional evocation of group dynamics, and a sharp character study of its protagonist, Candace Chen. It also features one of the most hauntingly plausible end-of-the-world scenarios I've encountered in recent fiction...[T]his is a monumentally unnerving novel, one that leaves no easy answers or comfortable nooks in which to take refuge.' Tor

'Severance operates with severe restraint... but there's a power to the restraint, and an elegance to the understatement.' --Vox

'Laced within its dystopian narrative is an encapsulation of a first-generation immigrant's nostalgia for New York... "Severance" evokes traces of, if not Meghan Daum in her "misspent youth," then the essay "Goodbye to All That," when a young and equally bemused Joan Didion looks at gleaming kitchens through brownstone windows, considering New York not as a place of residence but as a romantic notion.' New York Times

Puzzling out the truth is just one of the pleasures of reading Severance, as Ma leaves much of the reality ambiguous. It is also a very funny book, skewering metropolitan millennial life and relationships.' Best Books of 2018, A.V Club

'A quirky and addictive read about adulthood, loneliness and humanity.' -- Bookriot

'Severance is the most gorgeously written novel I've read all year; when I finished it, I immediately picked it up and read it all over again.' New Republic

'Ma's engrossing, masterfully written debut transforms the mundane into a landscape of tricky memory, where questions of late-stage capitalism, immigration, displacement and motherhood converge in such a sly build-up as to render the reader completely stunned.' BookPage

'A hilariously searing critique of who we are and how we survive in a modern world...Ma's caustic humor and incredibly smart commentary on late capitalism compares our adherence to routine and groupthink to a terminal infection. Her precise language, original voice, and use of all-too-relatable details inform the debut's deadpan depiction of a society teetering on the edge.' 'A smart, searing exposé on the perils of consumerism, Google overload, and millennial malaise...An already established audience will be eager to discover this work.' Library Journal

'Funny, frightening, and touching... Ling Ma manages the impressive trick of delivering a bildungsroman, a survival tale, and satire of late capitalist millennial angst in one book, and Severance announces its author as a supremely talented writer to watch.' --The Millions' Most Anticipated Books for August

'With scathing wit and savage imagination, Ling Ma's apocalyptic office novel Severance invites readers to recognize both the humor and dangers of America's decadent consumerism. In her disconcertingly plausible world, Ma is able to atomize the absurdity of everyday life into something digestible, even downright funny.' Best Books of 2018, Paris Review

'In ' i>Severance, ' Shen Fever is wiping out the world's population, but the hungers of capitalism, and the fracturing of globalization, is what has insured social death. It's an end times retrofitted to the monotonies of our generation.' Best Books of 2018, New Yorker

'Ma has produced [a] thoughtful apocalypse...[she] is able to use this vision to challenge and engage her readers and expose modern society.' Newtown Review of Books
'My autocorrect keeps putting King Ma instead of Ling Ma, but maybe that's on the mark: she totally rules. Severance is like nothing else around: a witty workplace novel and a terrifying plague yarn, an immigrant story and a sort of homecoming, full of Chinese whispers and New York ghosts.' Ed Park, author of Personal Days

'Ling Ma has given us a terrifyingly plausible vision of our collective future, one in which our comforts have become pathology and our habits death - and, in her protagonist, a hero who doesn't know if she should be seeking salvation or oblivion. And yet, somehow, Severance could easily be the funniest book of the year. It's a brilliant, deadpan novel of survival, in this world and in the precarious world to come.' --J. Robert Lennon, author of Broken River

Ling Ma was born in Sanming, China and grew up in Utah, Nebraska and Kansas. She attended the University of Chicago and received an MFA from Cornell University. Prior to graduate school she worked as a journalist and editor. Her writing has appeared in Granta, Vice, Playboy, Chicago Reader, Ninth Letter and other publications. A chapter of Severancereceived the 2015 Graywolf SLS Prize. She lives in Chicago.

Book Description 2018. Paperback. Condition: New. Paperback. Candace Chen, a millennial drone self-sequestered in a Manhattan office tower, is devoted to routine- her work, watching movies with her boyfriend, avoiding thoughts of her recently deceas.Shipping may be from multiple locations in the US or from the UK, depending on stock availability. 304 pages. 0.370. Seller Inventory # 9781925773279

Book Description 2018. Paperback. Condition: New. Paperback. Candace Chen, a millennial drone self-sequestered in a Manhattan office tower, is devoted to routine- her work, watching movies with her boyfriend, avoiding thoughts of her re.Shipping may be from our Sydney, NSW warehouse or from our UK or US warehouse, depending on stock availability. 304 pages. 0.370. Seller Inventory # 9781925773279