Items related to Ghosts of the Tsunami: Death and Life in Japan’s...

Ghosts of the Tsunami: Death and Life in Japan’s Disaster Zone 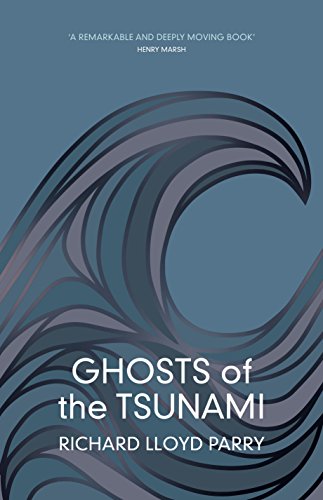 **WINNER OF THE RATHBONES FOLIO PRIZE**

‘The definitive book on the quake which killed more than 15,000 people.’ Mail Online
‘You will not read a finer work of narrative non-fiction this year.’ Economist
‘A breathtaking, extraordinary work of non-fiction.’ Times Literary Supplement
‘A future classic of disaster journalism.’ Observer

On 11 March 2011, a massive earthquake sent a 120-foot-high tsunami smashing into the coast of north-east Japan. By the time the sea retreated, more than 18,500 people had been crushed, burned to death, or drowned.

It was Japan’s greatest single loss of life since the atomic bombing of Nagasaki. It set off a national crisis, and the meltdown of a nuclear power plant. And even after the immediate emergency had abated, the trauma of the disaster continued to express itself in bizarre and mysterious ways.

Richard Lloyd Parry, an award-winning foreign correspondent, lived through the earthquake in Tokyo, and spent six years reporting from the disaster zone. There he encountered stories of ghosts and hauntings. He met a priest who performed exorcisms on people possessed by the spirits of the dead. And he found himself drawn back again and again to a village which had suffered the greatest loss of all, a community tormented by unbearable mysteries of its own.

What really happened to the local children as they waited in the school playground in the moments before the tsunami? Why did their teachers not evacuate them to safety? And why was the unbearable truth being so stubbornly covered up?

Ghosts of the Tsunami is a classic of literary non-fiction, a heart-breaking and intimate account of an epic tragedy, told through the personal accounts of those who lived through it. It tells the story of how a nation faced a catastrophe, and the bleak struggle to find consolation in the ruins.

"The definitive book on the quake which killed more than 15,000 people and led to the Fukushima nuclear disaster." (Mail Online)

"Every time I think of it, I’m filled with wonderment... This book is a future classic of disaster journalism, up there with John Hersey’s Hiroshima." (Rachel Cooke Observer)

"Mr Lloyd Parry offers a voice to the grieving who, too often, found it hard to be heard. It is a thoughtful lesson to all societies whose first reaction in the face of adversity is to shut down inquiry and cover up the facts. You will not read a finer work of narrative non-fiction this year." (Economist)

"A stunning book from the man who has a strong claim to be the most compelling non-fiction writer in the world." (Johann Hari)

"A book of absolute, harrowing truth and beauty. I'd give up four of my novels to have written this book." (Jim Crace Guardian)

"A breathtaking, extraordinary work... Parry writes with great fluency and timing, like a novelist alternating cadences and withholding information from the reader so as to create moments of tension and surprise. And there is something of the folklorist in the way he discusses the tradition of ghost stories in places such as Tohoku and Sendai." (Gavin Jacobson Times Literary Supplement)

"Compassionate and piercing... giving it the character of a finely conceived crime fiction or a psychological drama... Tragic, engrossing." (Eri Hotta Guardian)

"Parry, a journalist and long-time Tokyo resident, is able to draw something meaningful, even lovely, from the well of misery... Overall, the strength of the book lies in its stories, its observations and its language... The language is daring throughout." (David Pilling Financial Times)

"Ghosts of the Tsunami is alert to the social and political ramifications and transfixed by the spectral quality of the post-disaster landscape... These twin streams – one universal, the other intensely particular – come together in the mystery that is at this book’s core... Some of his most fascinating chapters take in the disaster’s psychological aftermath... It is full of stories of human endeavor, of individual and collective triumph over well-nigh insuperable odds... As well as being full of ghosts, Lloyd Parry’s A-grade reportage is also full of metaphors." (D. J. Taylor The Times)

"A remarkable and deeply moving book – describing in plain and perfect prose the almost unimaginable devastation and tragedy of the Japanese tsunami." (Henry Marsh)

The definitive book on the Japanese earthquake and tsunami of 2011, by the critically acclaimed author of The People Who Eat Darkness.

Ghosts of the Tsunami: Death and Life in Japan

Book Description Paperback. Condition: Very Good. The book has been read, but is in excellent condition. Pages are intact and not marred by notes or highlighting. The spine remains undamaged. Seller Inventory # GOR008595147

Book Description Condition: Good. Ships from the UK. Used book that is in clean, average condition without any missing pages. Seller Inventory # 39169435-20

Book Description Hardcover. Condition: Good. Previously water damaged, slight waving to the page edges Good condition is defined as: a copy that has been read but remains in clean condition. All of the pages are intact and the cover is intact and the spine may show signs of wear. The book may have minor markings which are not specifically mentioned. Most items will be dispatched the same or the next working day. Seller Inventory # wbb0018428317

Ghosts of the Tsunami