Items related to 'Discipline, System and Style': The Sixteenth... 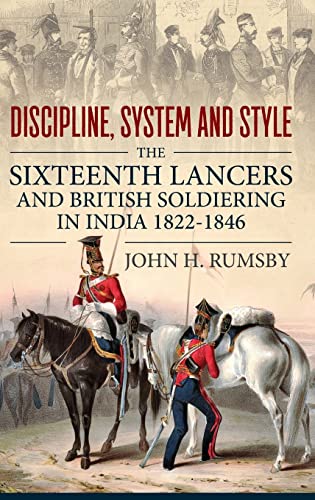 The Sixteenth Lancers already had a long and distinguished history when they sailed for India in 1822. Over the next twenty four years they fought in four wars, most famously in the Sutlej campaign, against the Sikhs. The Battle of Aliwal, in January 1846, is still celebrated by the successor regiment of the British Army. In their peacetime life in India, the Sixteenth sometimes enjoyed their exotic surroundings, but also endured the perils of a tropical climate – the regiment lost far more men due to disease than in battle. This book examines in detail what regimental soldiering was like in India in those years. It draws on an unprecedented range of sources, most of them previously unpublished. Aside from the official archives, the story is enlivened by a rich collection of journals, letters and diaries left by the officers and men. An important feature of the book is the detailed roll of every officer and man who served in the Sixteenth in the Sutlej. This provides a unique profile of the ranks at Aliwal: where they came from, what skills they brought to the army, why they enlisted, and what happened to them in their army career and afterwards. Some surprising results have been revealed: the high rate of literacy, the high suicide rates, and the proportion of men who stayed on in India when their regiment returned home. The officers were highly experienced and professional, in stark contrast to the amateur attitudes of their fellows in the Crimea. All aspects of regimental soldiering are examined– command, uniforms and weapons, horses, training and medical services, but also how the men lived and played (the Sixteenth’s theatre was famous). Many officers and men were from army families, and the period covered shows soldiers’ sons growing up in the regiment and often reaching high rank. This unique‘social history’ approach to the study of a British regiment will appeal to a wide audience; not only to students and academic staff studying military and social history, but also to students of Indian history, and to family historians with army ancestors. The account of the Sutlej campaign is relevant to the world-wide Sikh community. The nominal roll of the regiment will be appreciated by medal collectors, for whom an ‘Aliwal’ medal to the regiment has a special allure. The successor regiment of the Sixteenth Lancers is again serving in Afghanistan, so that this book has a topical resonance.

The book was a pleasure to read and a 'must have' for those interested in the 16th Lancers and soldiering in India, as well as being of interest to the more general reader. --Journal of the Orders and Medals Research Society

A first-class account and goes a long way to redress the shortage of detailed information on the service of the Queen's Army in India during the period prior to 1857. --Soldiers of the Queen

Born in London in 1949, John H Rumsby has lived and worked mainly in the north of England. He and his wife now live in West Yorkshire. His daughter is an artist living in the USA. After taking an Archaeology and Geography degree, his first job was to catalogue a regimental collection, amazed that he could be paid for indulging in his passion for military history. A varied museum career followed, involved caring for Roman mosaics, Numismatics collections, wooden legs and tractors. In 2005 he completed a doctorate at the University of Leeds on regimental soldiering with the Sixteenth Lancers in India in the early Nineteenth century. Retirement has allowed him more time for research, and he has published a number of papers on military subjects, as well as contributing to academic conferences.

3. DISCIPLINE, SYSTEM AND STYLE'. THE SIXTEENTH LANCERS AND BRITISH SOLDIERING IN INDIA 1822-1846

4. Discipline, System and Style?: The Sixteenth Lancers and British Soldiering in India 1822-1846 (War