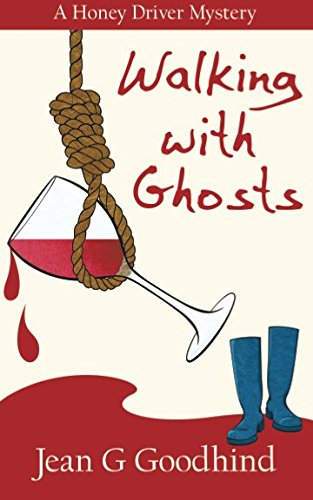 ‘Honey's earnest, charming quirkiness, her sometimes ribald humor, the zingy ripostes that pepper the dialogue, and the detailed descriptions of one of England's loveliest cities will appeal to ardent Anglophiles and British cozy fans alike.' Booklist (USA) 'The kick-off to Goodhind's new mystery series - fast moving with a likeable heroine and an impeccably rendered Bath background...' Kirkus Reviews 'Quirky characters and intriguing goings-on in my favourite city...an absolute treat!' Jill Mansell Walking with Ghosts - Book Three in the Honey Driver Mysteries Hotel owner and police liaison officer Honey Driver is about to find out that the living are more terrifying than the dead. Bath's answer to Miss Marple; though younger and fuller of figure - accompanies professor of the paranormal, Mary Jane, on a ghost walk. The ghosts fail to appear, but one of the walkers is later found hanging from the rafters of an old shop.The supernatural has nothing to do with the murder, but it is connected to the past and the international demand for old artefacts. Honey has two other big problems; the first is that she's being stalked by a man in wellies riding a motorbike. The second is that her mother is threatening to move closer to her hotel. No guesses as to which concerns her the most. But does Honey have a ghost of a chance of solving her latest case...?

'Sometimes it is the location alone makes you curious about a detective novel....Jean G Goodhind in her debut novel has added much more than that - a droll plot and a lot of British humour...' * Brigitte Magazine - Germany on Mord ist schlecht furs Geschaft (Something in the Blood) * 'The kick-off to Goodhind's new mystery series - fast moving with a likeable heroine and an impeccably rendered Bath background...' Kirkus Reviews (USA) on Something in the Blood 'Quirky characters and intriguing goings-on in my favourite city, Bath. J G Goodhind's wonderful books are crying out to be made into a TV series. An absolute treat!' Jill Mansell on Walking with Ghosts.

Jean G. Goodhind is a popular writer of women's fiction, romance and comedy. For many years she owned and ran a haunted guest house on the outskirts of Bath and was one of the founding members of the Bath Hotel and Restaurant Association. Her experiences inspired the international bestselling Honey Driver series. She has won a BBC Radio award for scriptwriting. She also writes women's fiction as Lizzie Lane and writes a regular column for the Western Daily Press.