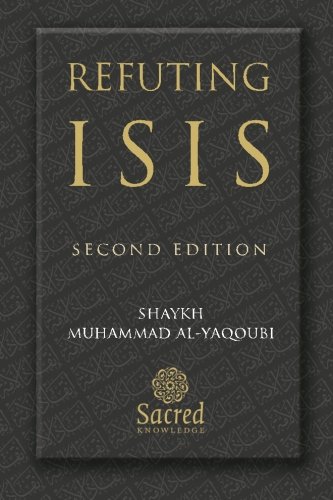 This second edition of the book comes after the heinous attacks that ISIS perpetrated in Egypt, Lebanon, Turkey, France, the USA and Indonesia. These attacks, which must be condemned by Muslim scholars and preachers around the world, are another testimony that, by killing women, children, and civilians, ISIS betrayed Islam, betrayed the Holy Quran, and betrayed the teachings of Prophet Muhammad (PBUH). After the overwhelming response to the first edition, the author felt the need for a second edition that quenches the thirst of the readers with more details. He penned this second edition to further elaborate on many important topics, such as the prohibition of burning human beings, the abolition of slavery, and Islam’s position towards minorities. New subjects are also tackled, such as the invalidity of excommunicating Muslim rulers for not applying certain aspects of Shari’ah, Islam’s position towards democracy, and the prohibition of destroying pre-Islamic monuments and sacred sites. Several other topics benefitted from more rigorous proofs, especially the section confirming that ISIS criminals have left the fold of Islam and are no longer Muslims.

Shaykh Muhammad Al-Yaqoubi is a world-renowned Islamic scholar of theology, jurisprudence, Prophetic tradition, and a spiritual leader to thousands of Muslims across the globe. He has been named one of the 500 most influential Muslims in the world for the past five years (theMuslim500.com). Shaykh Al-Yaqoubi was born in Damascus in 1963 and trained from an early age in the Islamic sciences by his father, who was an Imam and instructor at the Grand Umayyad Mosque in Damascus. He descends from a scholarly family that traces its lineage back to the Prophet Muhammad PBUH. Three of his ancestors were also Imams at the Grand Umayyad Mosque. A Sufi Master of the Shadhili Order, his primary focus is on the purification of the heart, the spiritual well being of Muslims, and the rectification of their social conduct and interaction within society based on highest virtues of the Prophet of Islam (peace be upon him). He has travelled around the world teaching Muslims, and bringing awareness to and spreading moderate Islam. Thousands of students have studied under him, many of whom are now Imams and teachers in the Islamic World – in the Arab world, the West, the Far East, and South Africa. Shaykh Al-Yaqoubi was one of the first scholars to speak up against the Assad regime and subsequently, against the rise of ISIS, denouncing its atrocities and proving its actions to be un-Islamic. To this end, he has delivered numerous lectures, penned articles, and given several TV and paper interviews to media agencies such as CNN, BBC, and PBS. He is the author of several books in Arabic in the areas of Islamic law and Prophetic Tradition. He speaks Arabic, English, and Swedish, and reads French and German.