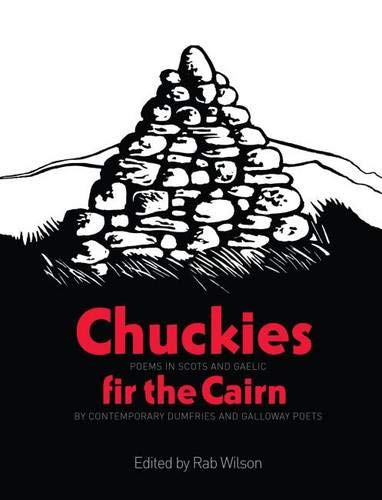 'Chuckies fir the Cairn' brings together Dumfries and Galloway's most eloquent poets in a collection that seeks to prove that Scots is a valid language not a dialect of English or slang. Passionate and intense; domestic and politically aware; strict attention to vocabulary and bold visual statements combine in the works of twelve highly individual poets. The unique aspects of Scots language, rich textures and sharp juxtapositions of tone, create a truly contemporary vision of Modern Scotland.

'The poets Rab Wilson has gathered in this anthology represent and important and often neglected strand in contemporary Scottish poetry. Native Scots-speaking poets whose chosen language is distinct from English and expressive beyond the capacities of that sister-language, they are committed to their country, their place and the people who inhabit the world beside them. However, earthed and native as they are, there is nothing narrowing or oversimplified here.' - ALAN RIACH The range and liveliness of the poems are a testament to the continuing vitality of the Scots language in Dumfries and Galloway - THE HERALD

CONTRIBUTORS - This collection includes work from the following poets: Liz Niven; Doug Curran; David Douglas; John Burns; Josie Neill; Hugh Bryden; John Mason; Derek Ross; Betty Tindall; William Neill and Angus Macmillan. ABOUT THE EDITOR - Rab Wilson was born in New Cumnock, Aryshire, where he now lives. Rab writes predominantly in Scots, and his poetry has appeared in some of Scotland s leading poetry magazines. He has performed his work to audiences throughout Scotland including those at the Edinburgh Festival and the Robert Burns International Festival. Rab has twice been a prize winner of the McCash Poetry Prize, is the Robert Burns Writing Fellow for Dumfries and Galloway Arts Association and is currently a member of the Scots Language Society s National Committee.

1. Chuckies fir the Cairn: Poems in Scots and Gaelic by Contemporary Dumfries and Galloway Poets (Paperback)

Book Description LUATH PRESS LTD, United Kingdom, 2009. Paperback. Condition: New. Language: Scots. Brand new Book. Scotland has built great literature out of its richly textured language. Like the stones bound together in a wall, the poets linkied here by location and shared language embody the beauty of their country and the passion 'pulsin through its heirt'. These Dumfries and Galloway poets, free in their own inimitable styles and approaches, are bound together by the unique culture of Scotland. Their poems help to raise the wall of that culture in the modern world. Seller Inventory # ABS9781906817053

4. Chuckies Fir the Cairn: Poems in Scots and Gaelic by Contemporary Dumfries and Galloway Poets

6. Chuckies Fir the Cairn: Poems in Scots and Gaelic by Contemporary Dumfries and Galloway Poets