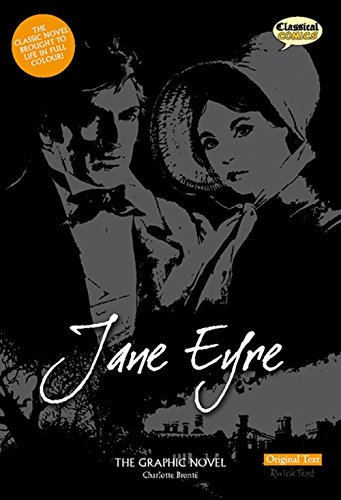 This Charlotte Bronte classic is brought to vibrant life by artist John M. Burns. His sympathetic treatment of Jane Eyre's life during the 19th century will delight any reader with its strong emotions and wonderfully rich atmosphere. Travel back to a time of grand Victorian mansions contrasted with the severest poverty and immerse yourself in this love story. It is presented in full colour graphic novel format wonderfully illustrated by legendary artist John M. Burns. It meets UK curriculum requirements. Teachers notes/study guides for KS2/KS3 available.

Charlotte BrontA" was born on 21st April 1816, at 74 Market Street in the village of Thornton near Bradford, Yorkshire. She was one of six children born to Maria Branwell and Patrick BrontA": Maria (1814), Elizabeth (1815), Charlotte (1816), Patrick Branwell (who was known as Branwell, 1817), Emily (1818) and Anne (1820). Her father, Patrick, was an Irish Anglican clergyman and writer, born in County Down, Ireland, in 1777. His surname was originally Brunty, but he decided to change his name, probably to give the impression of a more well-to-do background, giving the world the now familiar BrontA".A" Charlotte's mother, Maria, was born in 1785, to a prosperous merchant family in Cornwall. Patrick and Maria met in Hartshead, Yorkshire, while she was helping her aunt with the domestic side of running a school. In April 1820, when Charlotte was four years old, the family moved a short distance from Thornton to Haworth, where Patrick had been appointed perpetual curate of the church. Maria's sister, Elizabeth joined them a year later to help look after the children and to care for her sister, who was suffering from the final stages of cancer. She died in September 1821 - Charlotte was still only five years old. The Parsonage at Haworth was a literary household. From early childhood, the BrontA" children had written about the lives, wars and sufferings of people who lived in their own imaginary kingdoms. The story goes that Branwell had been given a set of toy soldiers in June 1826, and from these the children developed imaginary worlds of their own. Charlotte and Branwell wrote stories about their country - AngriaA" - and Emily and Anne wrote articles and poems about theirs - GondalA". These sagas, plays, poems and stories were written down in handmade little booksA" - books that they made from paper sheets stitched together. In a letter to author and biographer Elizabeth Gaskell, In July 1824 Maria (ten) and Elizabeth (nine) were sent to the Clergy Daughter's School at Cowan Bridge, near Kirkby Lonsdale in Lancashire. Charlotte (eight) and Emily (six) joined them there in August. Life at boarding school must have been grim. Maria became ill and was sent home in February 1825; she died at Haworth in May. Elizabeth fell ill that same month and, like her sister, was sent home; she died just a few months later. Both sisters died of tuberculosis (also known as consumptionA") and as a result of their deaths, Emily and Charlotte were withdrawn from the school. These events obviously had a great impact on Charlotte, who drew on the experience for Jane Eyre when she described Lowood School and the death of Helen Burns. In fact much of the novel mirrors Charlotte's own life. Charlotte, like Jane, spent many years as a governess for a number of families - a career which she viewed with some distaste (a view which appears in Chapter 30 of this book, at the bottom of page 95). Having no personal fortune and few respectable ways of earning a living, this was the only socially acceptable option for many genteel young ladies. Emily and Anne also became governesses, although Emily's career as a teacher was short-lived; it is reported that she told her pupils at Miss Patchett's School in Halifax that she much preferred the school dog to any of them!

Book Description 2008. Paperback. Condition: New. Paperback. This Charlotte Bronte classic is brought to vibrant life by artist John M. Burns. His sympathetic treatment of Jane Eyre's life during the 19th century will delight any reader with its str.Shipping may be from multiple locations in the US or from the UK, depending on stock availability. 144 pages. 0.487. Seller Inventory # 9781906332068

Book Description 2008. Paperback. Condition: New. Paperback. This Charlotte Bronte classic is brought to vibrant life by artist John M. Burns. His sympathetic treatment of Jane Eyre's life during the 19th century will delight any reader.Shipping may be from our Sydney, NSW warehouse or from our UK or US warehouse, depending on stock availability. 144 pages. 0.487. Seller Inventory # 9781906332068