Items related to Ripley's Believe it or Not 2008

Ripley, Robert Le Roy Ripley's Believe it or Not 2008 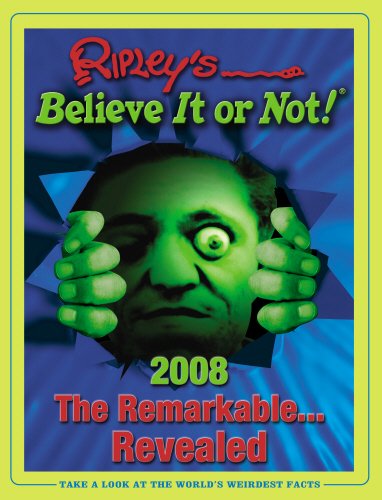 Following hot on the heels of last year's best-selling edition, "Ripley's Believe it or Not 2008" offers a whole new feast of bizarre facts, fiends and freaks - all guaranteed to fascinate, surprise and amaze. Gasp at the snake with feet. Stare in wonder at the dog with wheels. Marvel at the catfish whose fight started a fire which destroyed an entire house. Imagine dodging 68,000 kilos of over-ripe tomatoes, pelted in the two-hour annual Spanish tomato festival. And cower before the Black Widow - America's competitive eating champion who can put away 552 oysters in ten minutes. Illustrated throughout with extraordinary colour photographs, this is a must-have for anyone intrigued by the stranger aspects of our planet and its inhabitants.

`The book is packed full of hundreds of remarkable stories and is a must-have for anyone interested in the peculiar, the unusual or the downright bizarre' -- Kids Alive! Magazine

Robert Leroy Ripley was the man behind the Ripley brand - a journalist, radio presenter and cartoonist, who was fascinated by the oddities of everyday life. He was also passionate about travel and by 1940 had, at the age of 40 he had visited 201 countries. Combining these two interests he developed his own radio show - broadcast all over the world, even from underwater and snake pits, and also produced many cartoons, books, TV shows and film shorts. He was voted the most popular man in America in 1936, and his brand continued to develop even after his death in 1949. It is now enjoying a huge resurgence through the advent of the internet and through publication of Ripley's Believe It Or Not.