Items related to The Case-Book of Sherlock Holmes (Collector's Library) 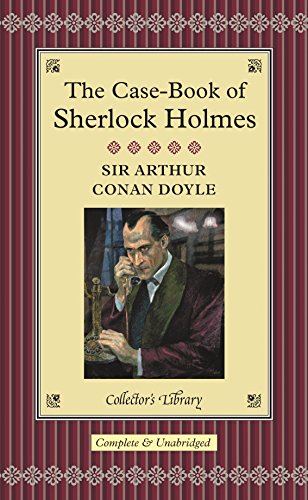 The Casebook of Sherlock Holmes contains Conan Doyle's last twelve stories about his great fictional detective. Compared with earlier collections these tales are darker, exploring such themes as treachery, mutilation and the terrible consequences of infidelity, and containing such gothic touches as a blood-sucking vampire and crypts at midnight.

With an Afterword by David Stuart Davies, a Fellow of the Royal Literary Fund, and an authority on Sherlock Holmes. He has written the Afterwords for all the Collector's Library Holmes volumes.

David Timson delivers an outstanding performance in this highly recommended audiobook of a collection of Conan Doyle's Casebook that features lesser-known tales--like The Adventure of the Blanched Soldierand The Adventure of the Retired Colourman--in a refreshing break from the recent rash of Holmes audiobooks focusing on Conan Doyle's earlier and more famous stories. Timson--who has narrated the entire Holmes canon--is a revelation; he captures the essence of the text, delivering perfect renditions for every character and vividly creating for the listener the rich and wonderful world of crime-ridden Victorian London. --Publishers Weekly

1. The Casebook of Sherlock Holmes

2. The Casebook of Sherlock Holmes

3. The Case Book of Sherlock Holmes