Items related to The Buddha and the Terrorist: The Story of Angulimala

Kumar, Satish The Buddha and the Terrorist: The Story of Angulimala

The Buddha and the Terrorist: The Story of Angulimala 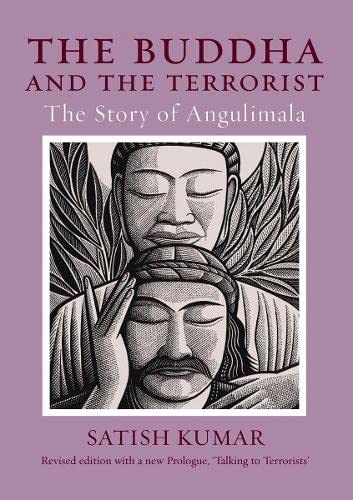 Among all the experiences of the Buddha, perhaps his eye-to-eye encounter with an actual terrorist is the one most relevant and vital for those of us caught in the binds of the early 21st century. By telling the tale of the pitiless blood-splattered Angulimala, Satish Kumar reminds us that when the Buddha deliberately and compassionately faced real fear, the fear in that real face evaporated. This revised edition includes a new Prologue, 'Talking to Terrorists', in which Satish Kumar discusses how we can best deal with the phenomenon of international terrorism.

The Buddha and the Terrorist is an inspiring retelling of an ancient legend. It has a lucid clarity and directness that speaks pointedly and movingly to our times. It should touch every heart that meets it." * Pico Iyer, author of The Global Soul *

Once upon a time in northern India, there lived a violent and fearsome outcaste called Angulimala (meaning 'necklace of fingers'). He murdered people, adding their fingers to his gruesome necklace, and was terrorising the towns and killing people in order to gain power and control of the state. The Buddha set out to meet this monster, and through his powerof love and argument, Angulimala renounced violence and took responsibility for his past actions. He was able to create a new life built on compassion and respect for others. The Buddha & The Terrorist brings a message for our time about the importance of looking within to understand the causes of violence, and the possibility of a peaceful means of conflict resolution.

1. The Buddha And The Terrorist: The Story Of Angulimala Kumar, Satish

2. The Buddha And The Terrorist: The Story Of Angulimala