Items related to British Voices: From the Irish War of Independence...

Sheehan, William British Voices: From the Irish War of Independence 1918 - 1921 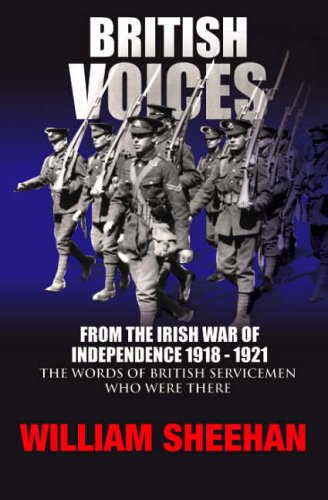 The Irish war of Independence has generated a wealth of published material but very little from a British perspective. Many British soldiers, sailors and airmen who served in Ireland from 1918-1921 left accounts of their service. Most describe military operations, views on the IRA, the Irish, the actions of their own forces, morale and relationships with local communities. Secret contacts between the British and the IRA and the use and abuse of intelligence are described. The author has delved deep into British military archives to unearth never-before published accounts.

WILLIAM SHEEHAN is a graduate of University College Cork. From Kanturk in County Cork, he has worked in the Health Services and is currently researching a PhD thesis on the Irish War of Independence as well as lecturing at University College Limerick. He is also a member of the Reserve Defence Forces. His second book, Fighting for Dublin, was published in June 2007.

Buy Used
Condition: As New
As new in dust wrapper, no markings... Learn more about this copy

2. British Voices: From the Irish War of Independence 1918-1921: The Words Of British Servicemen Who Were There

Book Description Collins Pr, 2006. Condition: Good. Ships from the UK. Former Library book. Shows some signs of wear, and may have some markings on the inside. Seller Inventory # GRP88120954