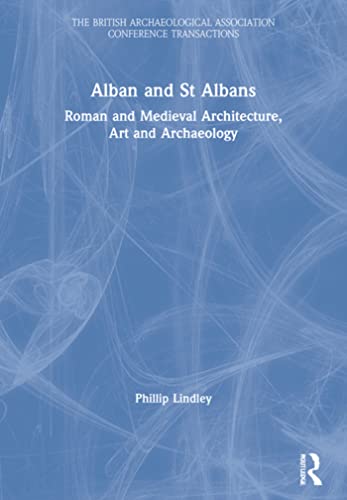 Contents: Religion and Art in St Alban's City; The late antique Passion of St Alban; Britain's Other Martyrs: Julius, Aaron and Alban at Caerleon; The Origins of St Albans Abbey: Romano-British Cemetery and Anglo-Saxon Monastery; Offa, Ćlfric and the Refoundation of St Albans: The Alban Cross; Early Recycling: The Anglo-Saxon and Norman Re-use of Roman Bricks with special reference to Hertfordshire; The Medieval Building Stones of St Albans ABbey; Remembering St Alban: the Site of the Shrine and the Discovery of the Twelfth-century Purbeck Marble Shrine Table; The Place of St Albans in Regional Sculpture and Architecture in the Second Half of the Twelfth Century; The Thirteenth-century West Front of St Albans Abbey; The Gothic Reconstruction of the Nave and Presbytery of St Albans Abbey; A Survey and Dating of the Timber Structures in the Central Tower of the Abbey Church; Pilgrims' Souvenir Badges of St Alban; The St Albans Monks and the Cult of St Alban: the Late Medieval Texts; The Chantry of Humphrey, Duke of Gloucester; The Great Screen and its Context. By a variety of contributors.

This lavishly illustrated volume, the transactions of a conference held in the summer of 1999, reviews religious activity at St Albans from the Iron Age until the end of the Middle Ages. For most of the Roman period Verulamium was a major pagan sanctuary, but in Christian times the focus of cult shifted to the site of the later church where it was associated with a Romano-British martyr. New evidence considered here ranges from the Biddles' epoch-making excavation of the Roman cemetery on the abbey site to a sensational new reconstruction of the early 5th century Passion of Alban by Richard Sharpe. Many contributions review the fabric and fittings of the medieval abbey. Studies of the former include papers on the re-use of Roman building materials in the Middle Ages, the Romanesque sculpture of St Albans and its environs, the lost 13th century west front, the Gothic reconstruction of the nave and presbytery and the 14th century timber roof of the central tower.Essays on the fittings of the church include a detailed investigation of a Coptic cross depicted by Matthew Paris and papers on the 12th century Purbeck-marble shrine table, the 15th century chantry of Duke Humphrey, and the