Items related to 10. EARLY MEDIEVAL EUROPE: The Ideal of Rome and Feudalism...

10. EARLY MEDIEVAL EUROPE: The Ideal of Rome and Feudalism (History of Architecture) 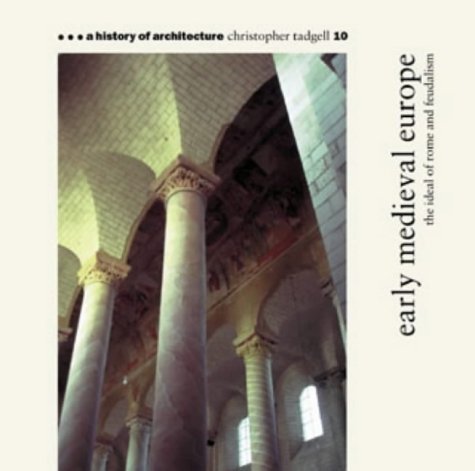 A concise and accessible introduction to European history, culture and architecture after the fall of the Roman Empire. This book traces the development of architecture in the territories of those who saw themselves as heirs to the Romans: Charlemagne in the west, and the Russian Czars in the east. Each developed their inheritance in parallel with the attempt to develop their empires. In the west, church planning conformed to the typical early-Christian basilican formula. Development culminated in the idea of heaven as a palace, prefigured here on earth by the church, with God as supreme architect. The conception of the church door as triumphal arch presided over by Christ the Judge is perhaps the most powerful theme of Romanesque art. In the Russian empire the late-Byzantine formula for planning was most commonly followed: the type is represented by a string of impressive buildings from Kiev to Moscow. The influence of the east led to the development of characteristic forms, and nowhere is the synthesis of the oriental and occidental more bizarre than in the Cathedral of the Intercession in Moscow, the pre-eminent symbol of the third Rome. 150 illustrations, most in color. About the A History of Architecture series: An on-going 25-volume series stretching from the earliest signs of settlement in the Euphrates and Jordan valleys to the stylistically and technologically sophisticated buildings of the present day. Each volume sets the buildings described and illustrated within their political, social and cultural contexts, exploring architecture not only as the development of form but as an expression of the civilizations within which it evolved. The series focuses on the story of the classical tradition from its origins in Mesopotamia and Egypt, through its seminal realization in Ancient Greece and Rome, to the Renaissance, neo-classicism, eclecticism, modernism and post-modernism. This thread is supplemented with excursions to Asia and the Islamic world. Great gifts; compact and collectable.

Early Medieval Europe: The Ideal of Rome and Feudalism (A History of Architecture #10)

Early Medieval Europe: The Ideal of Rome and Feudalism