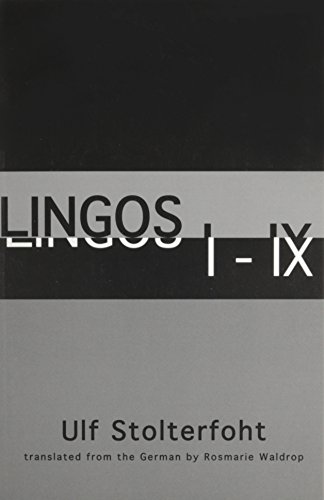 Poetry. Translated from the German by Rosmarie Waldrop. Pen Award for Poetry in Translation, 2008. LINGOS takes as its playground all the cultural baggage of our turn of the century and examines it with a mix of deconstruction, parody and sheer exuberance. The poems flaunt their intent to avoid linearity, prefabricated meaning and the lyrical I. Instead, they cultivate irony, punning, fragmenting, juxtaposing, distorting, and subject everything to an almost compulsive humor--the author and his own methods included. Ulf Stolterfoht was born in 1963 in Stuttgart and now lives in Berlin with his wife and three children. His 3 books of poems are all called Fachsprachen [lingos, jargons, technical terms] and are all published by Urs Engeler Editor: Fachsprachen I-IX (1998), Fachsprachen X-XVIII (2002), which received the Hans-Erich-Nossack-Forderpreis and the Christine Lavant-Preis respectively, and most recently, in 2004, Fachsprachen XIX-XXVII, for which he received the Anna-Seghers-Prize in 2005 and a stipendium to the German Academy in Rome. "Let us only say, that Stolterfoht's poems have something I would count as new possibilities of poetry: an intellectual serenity that is not just witty and satirical, but works with advanced poetic means and proves to be a la hauteur of the satirized subjects"--Jorg Drews.