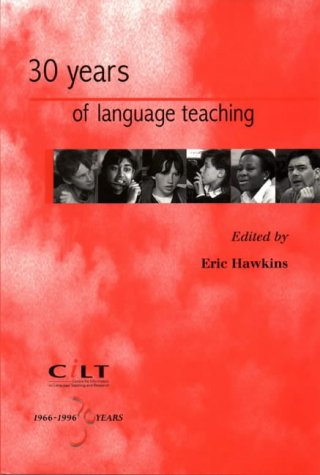 Published to coincide with the 30th anniversary of the formation of the Centre for Information on Language Teaching and Research (CILT), this volume reviews the transformation seen in language teaching in the UK since 1966, and looks forward to the challenges of a multilingual Britain. Twenty-five contributors consider every level from primary school to university and beyond. There is a review of research as well as a statistical survey of boys and girls' performance in examinations at age 16 and 18 between 1966 and 1996. The national need for language skills in business is considered. Britain's 180-plus community languages and the positions of Welsh and Gaelic are examined and a special section looks at developments in Scotland. The book also includes in-depth studies of recent developments, and raises a number of questions about language teaching in the UK. The book is aimed at those involved in modern language teaching in the UK. It should be of interest to teachers in schools, both at primary and secondary levels, and in universities.

It should also be suitable for those responsible for training teachers, both at HE level and in schools, as well as those outside the profession, including school administrators and governors, parents, and all decision-makers at local and national level.

Book Description CILT, the National Centre for Languages, 1996. Paperback. Condition: Used; Good. **Simply Brit** Shipped with Premium postal service within 24 hours from the UK with impressive delivery time. We have dispatched from our book depository; items of good condition to over ten million satisfied customers worldwide. We are committed to providing you with reliable and efficient service at all times. Seller Inventory # 1306351

Book Description . Paperback. Condition: Very Good. The book has been read, but is in excellent condition. Pages are intact and not marred by notes or highlighting. The spine remains undamaged. Seller Inventory # GOR002687980

Book Description CILT, the National Centre for Languages, 1996. Condition: Good. This is an ex-library book and may have the usual library/used-book markings inside.This book has soft covers. In good all round condition. Please note the Image in this listing is a stock photo and may not match the covers of the actual item,900grams, ISBN:9781874016670. Seller Inventory # 6849881

Book Description CILT Publications. Paperback. Condition: Used; Good. **SHIPPED FROM UK** We believe you will be completely satisfied with our quick and reliable service. All orders are dispatched as swiftly as possible! Buy with confidence!. Seller Inventory # mon0002052176

Book Description CILT, the National Centre for Languages, 1996. Condition: Fair. This is an ex-library book and may have the usual library/used-book markings inside.This book has soft covers. In fair condition, suitable as a study copy. Please note the Image in this listing is a stock photo and may not match the covers of the actual item,900grams, ISBN:9781874016670. Seller Inventory # 7958221