Items related to The Unsung Sixties: Memoirs of Social Innovation 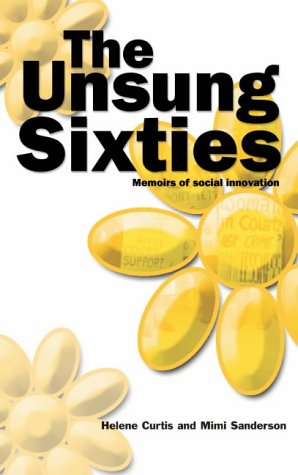 The 1960s was a period of excitement and innovation - Carnaby Street and Kings Road caught by the camera of David Bailey, mini-skirts, Mary Quant and the Liverpool sound of the Beatles. But behind the glamour was poverty, debt and social isolation. The Unsung Sixties comprises the stories of some of the people who founded or worked in groups or organisations dealing with the underside of the 1960s. It tells how they identified and came to tackle problems not generally recognised at the time.

Joan Bakewell in The Sunday Times, 29 Feb 2004: "... Running parallel to formal government policies, interacting with them and stepping in wherever they were seen to fail, came a tide of self-help, grass-roots activities: from Shelter to the Child Poverty Action Group, from the Joint Council for the Welfare of Immigrants to Consumer Advice Centres. ... The Unsung Sixties well and truly celebrates great achievements from small beginnings." --The Sunday Times

Polly Toynbee in Society Guardian, 11 Feb 2004: "... The moment this book landed on my desk, I kicked myself for not having thought of it myself. The Unsung Sixties: Memoirs fo Social Innovation, by Helene Curtis and Mimi Sanderson, will come as one of those eye-opening 'Of course!' moments to a lot of people who grew up in that decade. ..." --The Guardian

A work covering the rapid growth of social organizations in 1960s England, detailing what if felt like to be there at the beginning of a social organization and the dire political and economic circumstances that prompted their creation. Collecting stories from the groups that created many of modern England's most prominent community institutions, the book conveys the struggles and success of these groups, explaining how, in time, many came to be accepted aspects of the English social fabric. Thirty-eight figures from this tumultuous time in British history are interviewed, including the founders of groups like Shelter, the Claimants Union, and the North Kensington Law Centre.

Buy Used
Condition: As New
An apparently unread copy in perfect... Learn more about this copy

Book Description Whiting & Birch, Limited. Paperback. Condition: As New. An apparently unread copy in perfect condition. Dust cover is intact; pages are clean and are not marred by notes or folds of any kind. At ThriftBooks, our motto is: Read More, Spend Less. Seller Inventory # G1861770448I2N00

Book Description Whiting & Birch Ltd 11/02/2004, 2004. Condition: Very Good. This book is in very good condition and will be shipped within 24 hours of ordering. The cover may have some limited signs of wear but the pages are clean, intact and the spine remains undamaged. This book has clearly been well maintained and looked after thus far. Money back guarantee if you are not satisfied. See all our books here, order more than 1 book and get discounted shipping. . Seller Inventory # 7719-9781861770448

Book Description Paperback. Condition: Very Good. The book has been read, but is in excellent condition. Pages are intact and not marred by notes or highlighting. The spine remains undamaged. Seller Inventory # GOR003662587