Items related to The Ashes' Strangest Moments: Extraordinary but...

Baldwin, Mark The Ashes' Strangest Moments: Extraordinary but True Tales from over a Century of the Ashes

The Ashes' Strangest Moments: Extraordinary but True Tales from over a Century of the Ashes 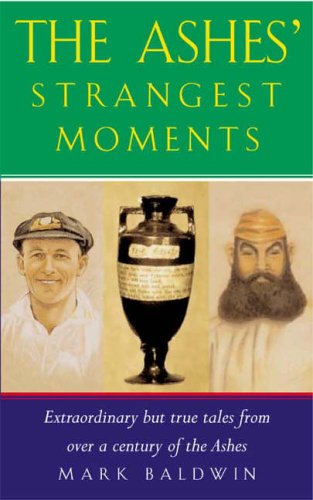 An entertaining collection of extraordinary but true tales from over a century of the Ashes, cricket's most famous international contest. The book contains episodes from all of the most famous series', including the controversial 1932-33 Bodyline series; England's momentous victory in the coronation year of 1953; their dramatic last-minute win following a freak rainstorm that flooded the Oval in 1968; Beefy's Ashes of 1981; and the plague of injuries that forced out all but four of England's original sixteen-man squad in 1994. Great bowlers and batsmen alike are all featured, whether Aussie or Pom, from W.G. Grace to Shane Warne. This year's Ashes (2009) are to take place in England - the first test starts on July 8th in Cardiff (a new venue), while the second, third, fourth and fifth tests will be held at Lords, Edgbaston, Headingley and the Oval respectively. With the England team once again in good form, a solid captain in Andrew Strauss (which also leaves Kevin Pieterson to concentrate on his superb batting), and Australia not quite as strong since Glenn McGrath, Shane Warne and Justin Langer's retirement, it promises to be an exciting and closely-fought series. This summer the nation will once again take test cricket to its heart - all the more so since the collapse of Stanford's 20/20.

This new title in Robson's ever-popular Strangest series charts amusing moments in the history of the Ashes, from its beginnings in 1882. There have been more than 60 series between England and the Aussies, and in digging out some of the most outlandish stories from each year, Mark Baldwin uncovers some of the oddest incidents - some bizarre, some tragic, some downright crazy, and all of them true! The Ashes has grown to be a serious business, and with coverage that includes the early years, the 1932-33 'Bodyline' series, sketches of the greatest cricketers from W G Grace to Ian Botham, and the winning series for England, this fascinating book is a must for all cricketing enthusiasts and for anyone interested in the history of the sport. Note: England vs. Australia - The Ashes Test Match 2005 takes place at Trent Bridge, Nottingham, 25-29 August 2005.

Mark Baldwin has been a journalist for 'The Times' and 'Evening Standard' for many years, reporting on Test cricket worldwide. He has followed the national team on many tours abroad, and is the official writer for the English Cricket Board's Test match programmes. He will be covering the coming Ashes series for his newspapers, as well as supplying support for the MCC.

The Ashes' Strangest Moments: Extraordinary But True Tales from Over a Century of the Ashes (Strangest series) Baldwin, Mark and Hussain OBE, Nasser