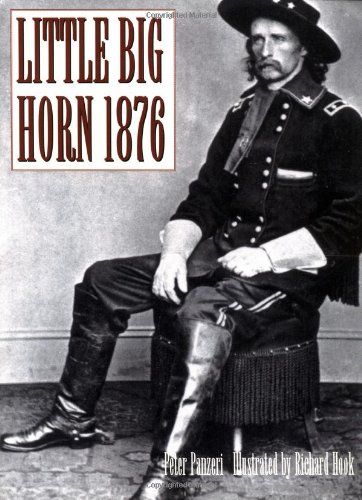 The death of George Armstrong Custer, and over half of his now immortal 7th Cavalry Regiment in the valley of the Little Big Horn on 25 July 1876, has become the most celebrated battle of the Indian wars. It was the greatest, and the last, victory of the Native Americans over the United States military. Planned as a combined operation by three different columns of troops commanded by Generals Crook and Terry and Colonel John Gibbon, the campaign went wrong almost from the start.

A history of one of the most famous battles of the Indian Wars. The largest concentration of Indian Warriors ever seen united under the spiritual leadership of Sitting Bull, and on a hillside in Southern Montana Custer's luck finally ran out.

Peter Panzeri is a serving officer in the US Army who has had a passionate interest in the history of the American Indian wars for many years. Peter lives and works in Arizona.

Book Description Paperback. Condition: Very Good. Richard Hook (illustrator). The book has been read, but is in excellent condition. Pages are intact and not marred by notes or highlighting. The spine remains undamaged. Seller Inventory # GOR004714595

Book Description Paperback. Condition: Fine. Richard Hook (illustrator). Item is in like new condition with minor shelf wear. Might have a remainder mark or slight wear from sitting on the shelf. Seller Inventory # DS-1855329522-1