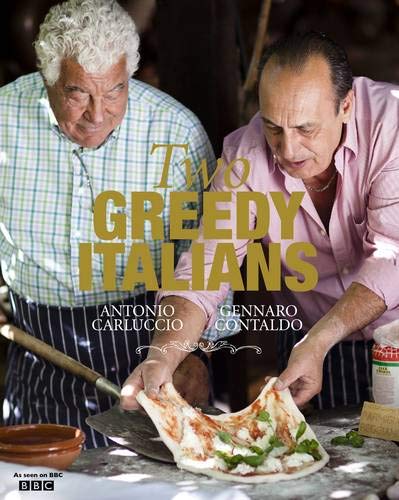 Now available in paperback. In this book written to accompany the primetime BBC series Two Greedy Italians, Antonio Carluccio and Gennaro Contaldo embark upon an amazing journey back to their homeland to reconnect with their culinary heritage, explore past and current traditions and reveal the very soul of Italian gastronomy.

Containing over 100 mouthwatering recipes, this exceptional book goes beyond the cliches to reveal authentic Italian food, as cooked by real Italians. It includes an intriguing combination of classic dishes and ingredients as well as others showcasing the changes in style and influences that have become a part of the Italy of today.

Carluccio and Contaldo's return journey to their homeland captures the essence of its authors - their humour, their wisdom, their curiosity and, most significantly, their shared passion for good simple food.

This kitchen-friendly cookbook contains more than 100 recipes from the two TV veterans. You ll remember why you love these greedy Italians. --- Restaurant, March 1 2011

Whether you re a longtime lover of creating your own Italian food or new to crafting the cuisine, this will be a welcome addition to your cookbook collection. - --BBC Good Food, April 1 2011

Antonio Carluccio is one of Italy's great food ambassadors. He has written fourteen bestselling books for Quadrille, including Complete Italian Food, Complete Mushroom Book, Italia and Simple Cooking and has also made numerous television programmes. He ran the Neal Street Restaurant in London's Covent Garden and spent 10 years developing the hugely successful Carluccio's Caffes. In 1998 Antonio was appointed Commendatore, the equivalent of a British knighthood, for his knowledge, enthusiasm and lifetime's service to the Italian food industry, and in 2007 he received an O.B.E. Gennaro Contaldo is a highly respected chef in London as well as a renowned personality in his own right. He is widely known as the Italian legend who taught Jamie Oliver all he knows about Italian cooking. Born in Minori on the Amalfi Coast, Gennaro's quintessentially Italian spirit and positive nature has made him a TV favourite, regularly appearing on BBC's Saturday Kitchen. He has written five cookbooks - of which Passione was awarded Best Italian Cookbook at the World Gourmand Awards in 2004 - and has worked in some of London's most popular restaurants.