Stargardt, Nicholas The German War: A Nation Under Arms, 1939–45 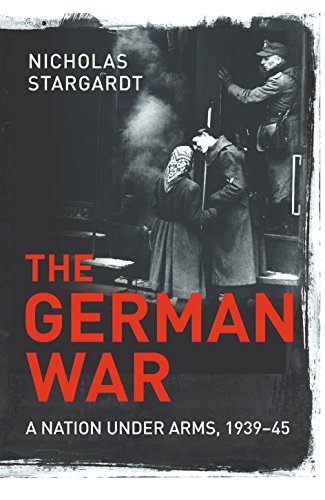 SHORTLISTED FOR THE 2016 PEN HESSELL-TILTMAN PRIZE

The Second World War was a German war like no other. The Nazi regime, having started the conflict, turned it into the most horrific war in European history, resorting to genocidal methods well before building the first gas chambers. Over its course, the Third Reich expended and exhausted all its moral and physical reserves, leading to total defeat in 1945. Yet 70 years on – despite whole libraries of books about the war’s origins, course and atrocities – we still do not know what Germans thought they were fighting for and how they experienced and sustained the war until the bitter end.

When war broke out in September 1939, it was deeply unpopular in Germany. Yet without the active participation and commitment of the German people, it could not have continued for almost six years. What, then, was the war Germans thought they were fighting? How did the changing course of the conflict – the victories of the Blitzkrieg, the first defeats in the east, the bombing of Germany’s cities – change their views and expectations? And when did Germans first realise that they were fighting a genocidal war?

Drawing on a wealth of first-hand testimony, The German War is the first foray for many decades into how the German people experienced the Second World War. Told from the perspective of those who lived through it – soldiers, schoolteachers and housewives; Nazis, Christians and Jews – its masterful historical narrative sheds fresh and disturbing light on the beliefs, hopes and fears of a people who embarked on, continued and fought to the end a brutal war of conquest and genocide.

"A terrific book. Nicholas Stargardt brilliantly explores diaries, letters and other previously untapped sources to provide more vivid and nuanced insight than ever before achieved into the motivation of ordinary Germans fighting the most horrific war of all time" (Ian Kershaw)

"A gripping new book...To write like this requires a rare sensitivity and psychological sophistication coupled with a degree of fearlessness...Stargardt impresses not only as a cultural historian. He also has an impressively strong grasp on the military narrative of the war. And this is indispensable...Stargardt has given us a truly profound piece of history" (New York Times Book Review)

"Beautifully written and convincingly argued, this book is a must" (Saul Friedlander, author of Nazi Germany and the Jews)

Stargardt is the son of a German-Jewish father and Australian mother. He was born in Melbourne, Australia, and lived in Australia, Japan, England and Germany. He studied at King's College, Cambridge, and is a fellow of Magdalen College, Oxford, in the United Kingdom, where he teaches modern European history. He has written widely on the history of modern Germany, political and social thought and the Holocaust. He has two sons and is married to the historian Lyndal Roper.[1] He is the author of The German Idea of Militarism: Radical and Socialist Critics (1994), an intellectual and political history of anti-militarist movements in Germany before the First World War, and of Witnesses of War: Children’s Lives under the Nazis (2005), which offered the first social history of Nazi Germany in the Second World War through the eyes of children. He is currently writing a social history of Germany in the Second World War.