Items related to O'Brien Pocket History of the IRA: From 1916 Onwards...

O'Brien Pocket History of the IRA: From 1916 Onwards (Pocket Books) 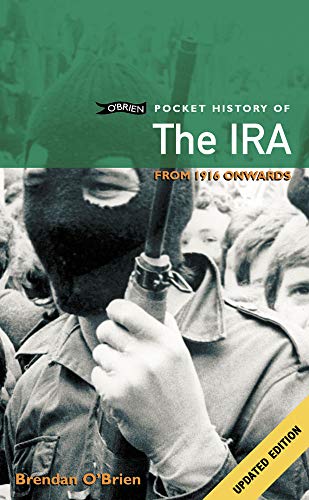 An accessible, clearly-written account of the IRA from its beginnings to today. It covers the origins and history of the organisation, its aims, the political and military thinking which has driven its activities, and the major personalities who have shaped the direction of the movement down through the years.

The relationship with the Irish and British governments is examined, as well as the effects of the major bombing campaigns and the 1981 hunger strikes. It also explains the radical shift in thinking which led to the IRA seeking a political way towards the goal of Irish unity rather than pursuing the entrenched 'Brits Out' policy at the point of a gun.

The background to the IRA ceasefire, and the many factors which contributed to its ending are looked at, as well as the prospects for a lasting peace in one of the world's most troubled arenas.

This is intended as an easy-to-read overview of the IRA and the Northern situation, accessible to both the tourist and the interested general reader.

Brendan O’Brien reported on Northern Ireland as RTÉ’s senior current affairs reporter beginning in 1974, and he made three major documentaries about the IRA. He won many awards for investigative journalism, including European Journalist of the Year 1998 and the Amnesty International Award 2001. Since retiring from RTÉ he has lectured extensively on the Northern Irish conflict and peace process.

He is the author of The Story of Ireland, a children’s book illustrated by Cartoon Saloon; The Long War: The IRA and Sinn Féin; and the revised and updated edition of A Short History of Ireland (by the late Breandán
Ó hEithir). He lives in Wicklow with his family.

1. OBrien Pocket History of the IRA: From 1916 Onwards (Pocket Books)

Book Description OBrien Press, 2007. Paperback. Condition: Used; Good. **Simply Brit** Shipped with Premium postal service within 24 hours from the UK with impressive delivery time. We have dispatched from our book depository; items of good condition to over ten million satisfied customers worldwide. We are committed to providing you with reliable and efficient service at all times. Seller Inventory # 2484001

Book Description O'Brien Press, 2007. Condition: Good. 7th. Ships from the UK. Former Library book. Shows some signs of wear, and may have some markings on the inside. Seller Inventory # GRP118553814

Book Description OĂ˘â â ˘Brien Press Ltd 2007-08-24, 2007. Paperback. Condition: Good. Item is in good condition. Some moderate creases and wear. This item may not come with CDs or additional parts including access codes for textbooks. Might be an ex-library copy and contain writing/highlighting. The dust jacket might be missing. Seller Inventory # DS-1847170803-3

5. O'Brien Pocket History of the IRA: From 1916 Onwards (Pocket Books)

6. O'Brien Pocket History of the IRA: From 1916 Onwards (Pocket Books)