Items related to Memoirs of a Geezer: Music, Mayhem, Life 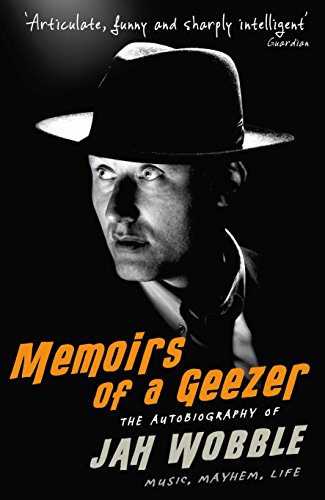 Will be shipped directly from Germany.

Rather than another tale of redemption by a spoiled celeb, this autobiography - articulate, funny and sharply intelligent - reads like a valuable cultural historiography... Jah Wobble has already created one of the most remarkable and idiosyncratic discographies of any musician in Britain during the last 30 years. Memoirs of a Geezer helps to define the questing, sometimes troubled soul behind those legendary low frequencies. (Alan Warner Guardian 2009-10-10)

There isn't a dull page in this slyly entertaining memoir. Wobble is the ultimate punk and post-punk raconteur and for those not lucky enough to spend time with the great man, this book... is a terrific substitute... [A]n influential and revered bassist... Wobble's character assessments are always entertaining... (Suzi Feay Independent on Sunday 2009-09-27)

Post-punk bass behemoth and former London Tube driver bares all...
It's a colourful read, full of the sort of old-school music business shenanigans you hope don't go on anymore... And Wobble can write... Very entertaining.

Wobble's writing is punchy and often extremely funny... It's the terse voice of a man staking out his own territory... the greatest of recent bassists. (Derek Walmsley The Wire 2009-10-01)

Riveting account of East End bassist's life...
Wobble's autobiography is extraordinary: brutally honest, often hilarious, resolutely adhering to his down-to-earth geezer principles but soul-searching and spiritual, with his beloved-but-embattled East End the recurring backdrop. While wit or received wisdom drip from every anecdote, he pulls no punches... Lucid, gripping and incredibly direct, Wobble has produced nothing less than a Cockney Chronicles.

It's hard not to warm to the candour with which he tracks a life story which has survived alcoholism and endless back-stabbing, to emerge with a healthy perspective on the excesses of a misspent youth... All these years after PiL imploded, anger is still an energy. (Keith Watson Metro 2009-09-22)

There's plenty to talk about with John Wardle...his honesty and forthrightness is the book's greatest strength...Wobble is an engaging narrator. (Joe Shooman Record Collector 2009-09-01) Book Description: