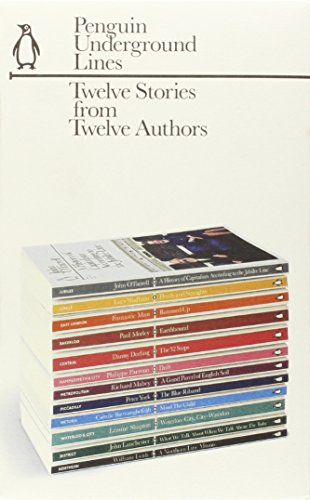 To celebrate the 150th anniversary of the Tube, the Penguin Underground Lines box set brings together 12 books by writers ranging from John O'Farrell to John Lanchester, Lucy Wadham to the Kids' Company

Vital statistics: Twelve books, one for each Underground line, to celebrate the Tube's 150th anniversary

Height: when all twelve are stacked up: 4.7 inches

Idea for series: Penguin asked twelve people to tell their tale of the city in 15,000 words (or in one case, no words at all), each inspired by a different tube line.

Defining characteristics: While the responses range from the polemical to the fantastical, the personal to the societal, they offer something for every taste. Read individually they're delightful small reads, pulled together they offer a particular portrait of a global city.

Appearance: determined by the authors, who photographed/drew/picked their cover image, chose their title and wrote the back cover copy, the Penguin logo also takes an outing in the official colour of each tube line -- a unique play with Penguin's design.

Authors include the masterly John Lanchester, the children of Kids Company, comic John O'Farrell and social geographer Danny Dorling. Ranging from the polemical to the fantastical, the personal to the societal, they offer something for every taste. All experience the city as a cultural phenomenon and notice its nature and its people. Read individually they're delightful small reads, pulled together they offer a particular portrait of a global city (Evening Standard)

A fascinating collection with a wide range of styles and themes. The design qualities are excellent, as you might expect from Penguin with a consistent look and feel while allowing distinctive covers for each book. This is a very pleasing set of books (A Common Reader blog)

The contrasts and transitions between books are as stirring as the books themselves ... A multidimensional literary jigsaw (Londonist)

A series of short, sharp, city-based vignettes - some personal, some political and some pictorial ... each inimitable author finds that our city is complicated but ultimately connected, full of wit, and just the right amount of grit (Fabric Magazine)

A collection of beautiful books (Grazia)