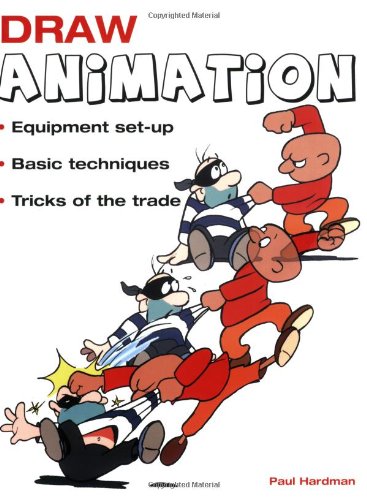 Teach yourself how to draw and make fun animated short films with this all-encompassing guide. A comprehensive introductory section covering the materials and equipment needed to get you started. Building characters, using body form to show expression and type casting to help you develop your characters. Useful information on how to develop story lines that will enthrall viewers. Written and illustrated by Paul Hardman, a professional cartoonist whose work has appeared in many films, magazines and newspapers.

Animation has gained increasing popularity during the last decade, with animated feature films drawing in millions to our cinemas. But why just watch animation when you can make your own? "Draw Animation" guides you through the fascinating process of making an animated film. Paul Hardman lets you share the fascination held by all who work in animation; fascination for the magic of life that you're able to impart to a stack of inanimate, cartoon drawings. Animation, the magical medium, can transport you to a land and time that is only restricted by your own imagination: your characters can do the impossible and become the impossible in an instant. The process of producing an animated film involves many varied skills and a great deal of time and dedication. Paul takes you step by step through a process which you will be able to achieve in your own home or studio. Because the set-up of a scene can often become complicated Paul shows you how to avoid the pitfalls and provides you with solutions for a simple and effective way to produce a convincing end result that will prove both exciting and rewarding.

Paul Hardman is a member of the British Cartoonists' Association, the Cartoonists' Club of Great Britain, the Cartoonist Guild and the worldwide Federation of Cartoonists' Organisations. Paul's work has appeared in most of the National Press publications and in many magazines and periodicals. For several years he worked as sports editorial cartoonist for the Daily and Sunday Mirrors and occasionally for Sporting Life. He lives in Southport.