Items related to The Man Who Went into the West: The Life of R. S. Thomas

Rogers, Byron The Man Who Went into the West: The Life of R. S. Thomas

The Man Who Went into the West: The Life of R. S. Thomas 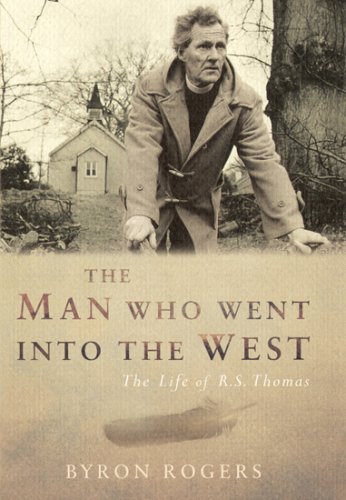 This is the follow-up to the author's previous biography, the critically acclaimed and sales success, "The Last Englishman". It is a hilarious and extraordinary story of a singular man. It describes the life of one of 20th-century English literature's greatest poets. It features R.S. Thomas's poetry published by Penguin Modern Classics, Orion and Bloodaxe with substantial sales every year. He is regarded in Wales as the national poet. Byron Rogers' previous books for Aurum have twice been Radio 4 Book of the week. This is sure to be widely reviewed. Byron Rogers' first biography, of the novelist and publisher J.L. Carr, was read on "Book of the Week", reprinted twice, sold 5000 copies in hardback and was hailed by Simon Jenkins in "The Times" as 'a miniature masterpiece of social history'. For his second biography Rogers - a Welshman who moved to England - has found the perfect subject: the great Welsh poet R.S. Thomas (an English-educated man who set out to become more and more Welsh throughout his life). Thomas is now accepted, along with Ted Hughes, Philip Larkin and Seamus Heaney, as one of the great post-war British poets. All his life, he was a minister in the Church of Wales, at a succession of increasingly remote country parishes. He had a reputation for being an austere, unforgiving, taciturn, wintry man. Now Byron Rogers has unearthed the amazing story of this man's life, and that of his household - one both comic, absurd and touching. Here is a man who banned Hoovers from his house on grounds of noise, whose first act on moving into an ancient cottage was to rip out the central heating, whose attempts to seek out more authentically Welsh parishes only brought him more into contact with loud English holidaymakers. To Thomas's many admirers this will be a surprising, sometimes shocking, but at last humanising portrait of someone who wrote truly metaphysical poetry.

'This wonderful book ... ought to win every award for which it is eligible.' -- Andrew Martin, Sunday Telegraph

One of the most brilliant biographies I have ever read, written with a magical combination of sympathy and horror -- Craig Brown, Mail on Sunday

The austerity and extremism of Thomas’s life and work are tackled with sensitivity and a sprightly wit. -- The Times

Byron Rogers' previous books include An Audience with an Elephant, The Bank Manager and the Holy Grail, The Last Englishman and The Last Human Cannonball. All are published by Aurum. He lives in Carmarthen and Northamptonshire.