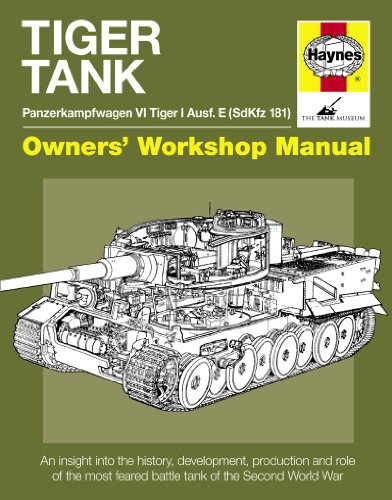 The German Tiger I was the most feared battle tank of the Second World War. Its invincibility lay in its main gun and heavy defensive armour. Using the successful "Haynes Manual" format, the "Tiger Tank Manual" gives an insight into acquiring, owning and operating one of these awesome fighting vehicles. The Tank Museum's Tiger '131' forms the centrepiece of this manual, which includes full photographic coverage of the strip-down of '131' and its engine. Vivid personal recollections describe what it was like to command a Tiger in war.

David Fletcher is the Tank Museum librarian, a prolific author, and a world expert on tanks. Mike Hayton and Stephen Vyse are museum volunteers who have been closely involved in the restoration of the Tank Museum's Tiger '131' to running order.

Book Description Haynes Publishing, 2011. Hardcover. Condition: Very Good. Very Good: a copy that has been read, but is in excellent condition. Pages are intact and not marred by notes or highlighting. The spine remains undamaged. Most items will be dispatched the same or the next working day. Seller Inventory # wbb0014706129

Book Description Haynes Publishing, 2011. Hardcover. Condition: Very Good. No markings. WE ARE PROCESSING ORDERS AS NORMAL DURING THIS VIRUS EPIDEMIC, ALL ITEMS ARE SENT BY ROYAL MAIL. DISPATCHED FROM THE UK WITHIN 24 HOURS ( BOOKS ORDERED OVER THE WEEKEND DISPATCHED ON MONDAY) BY ROYAL MAIL. ALL OVERSEAS ORDERS SENT BY AIR MAIL. WE ALSO ACCEPT PAYMENT IN US DOLLARS OR EURO BY BANK TRANSFER. Seller Inventory # mon0000716305