Items related to From Fatwa to Jihad: How the World Changed: The Satanic...

Malik, Kenan From Fatwa to Jihad: How the World Changed: The Satanic Verses to Charlie Hebdo

From Fatwa to Jihad: How the World Changed: The Satanic Verses to Charlie Hebdo 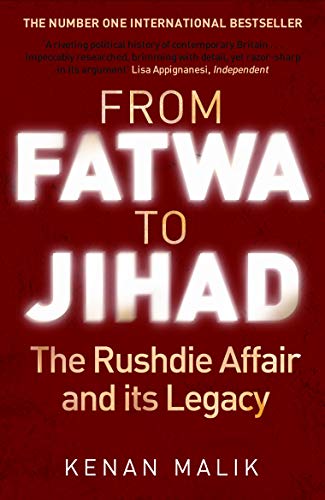 Twenty years ago, the image of burning copies of Salman Rushdie's The Satanic Verses held aloft by thousand-strong mobs of protestors became an internationally familiar symbol of anger and offence. Kenan Malik examines how the Rushdie affair transformed the debate worldwide on multiculturalism, tolerance and free speech, helped fuel the rise of radical Islam and pointed the way to the horrors of 9/11 and 7/7.

"'A gripping account of how we went from burning books to bombs on buses. The Rushdie Affair has shaped all our lives. This book shows us how.' Hanif Kureishi * 'A thorough and highly readable history of the politics of the Rushdie affair and an important intervention in the current debate on freedom of expression.' Monica Ali 'A riveting political history of contemporary Britain... Impeccably researched, brimming with detail, yet razor-sharp in its argument.' Lisa Appignanesi, Independent"

Kenan Malik is a writer, lecturer and broadcaster. He is a Visiting Senior Fellow in the Department of Political, International and Policy Studies at the University of Surrey. He is a presenter of Analysis on Radio 4 and a panellist on The Moral Maze. His books include The Meaning of Race (1996), Man, Beast and Zombie (2000) and Strange Fruit: Why Both Sides are Wrong in the Race Debate (2008).

1. From Fatwa to Jihad: How the World Changed: The Satanic Verses to Charlie Hebdo

Book Description Atlantic Books 01/01/2010, 2010. Condition: Very Good. Shipped within 24 hours from our UK warehouse. Clean, undamaged book with no damage to pages and minimal wear to the cover. Spine still tight, in very good condition. Remember if you are not happy, you are covered by our 100% money back guarantee. Seller Inventory # 6545-9781843548256

2. From Fatwa to Jihad: How the World Changed: The Satanic Verses to Charlie Hebdo

Book Description -. Paperback. Condition: Very Good. From Fatwa to Jihad: How the World Changed: The Satanic Verses to Charlie Hebdo This book is in very good condition and will be shipped within 24 hours of ordering. The cover may have some limited signs of wear but the pages are clean, intact and the spine remains undamaged. This book has clearly been well maintained and looked after thus far. Money back guarantee if you are not satisfied. See all our books here, order more than 1 book and get discounted shipping. Seller Inventory # 7719-9781843548256

3. From Fatwa to Jihad : The Rushdie Affair and Its Legacy

4. FROM FATWA TO JIHAD: THE RUSHDIE AFFAIR AND ITS LEGACY.