Items related to The White Tiger: WINNER OF THE MAN BOOKER PRIZE 2008

The White Tiger: WINNER OF THE MAN BOOKER PRIZE 2008 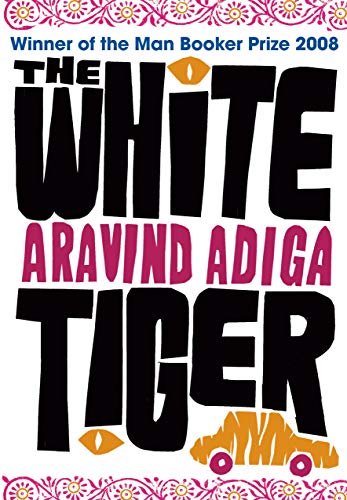 Balram Halwai is the White Tiger - the smartest boy in his village. His family is too poor for him to afford for him to finish school and he has to work in a teashop, breaking coals and wiping tables. But Balram gets his break when a rich man hires him as a chauffeur, and takes him to live in Delhi. The city is a revelation. As he drives his master to shopping malls and call centres, Balram becomes increasingly aware of immense wealth and opportunity all around him, while knowing that he will never be able to gain access to that world. As Balram broods over his situation, he realizes that there is only one way he can become part of this glamorous new India - by murdering his master.

The White Tiger presents a raw and unromanticised India, both thrilling and shocking - from the desperate, almost lawless villages along the Ganges, to the booming Wild South of Bangalore and its technology and outsourcing centres. The first-person confession of a murderer, The White Tiger is as compelling for its subject matter as for the voice of its narrator - amoral, cynical, unrepentant, yet deeply endearing.

Winning the Man Booker prize is something that most authors dream of, although -- ironically -- the reputation of the prize itself was under siege a few years ago. Books that won the award were acquiring a reputation of being difficult and inaccessible, but those days appear to be over -- and unarguable proof may be found in the 2008 winner, The White Tiger by Aravind Adiga. Apart from its considerable literary merit, the novel is the most compelling of pageturners (in the old-fashioned sense of that phrase) and offers a picture of modern India that is as evocative as it is unflattering. The protagonist, too, is drawn in the most masterly of fashion.

Balram Halwai, the eponymous ‘white tiger’, is a diminutive, overweight ex-teashop worker who now earns his living as a chauffeur. But this is only one side of his protean personality; he deals in confidence scams, over-ambitious business promotions (built on the shakiest of foundations) and enjoys approaching life with a philosophical turn of mind. But is Balram also a murderer? We learn the answer as we devour these 500 odd pages. Born into an impoverished family, Balram is removed from school by his parents in order to earn money in a thankless job: shop employee. He is forced into banal, mind-numbing work. But Balram dreams of escaping -- and a chance arises when a well-heeled village landlord takes him on as a chauffeur for his son (although the duties involve transporting the latter's wife and two Pomeranian dogs). From the rich new perspective offered to him in this more interesting job, Balram discovers New Delhi, and a vision of the city changes his life forever. His learning curve is very steep, and he quickly comes to believe that the way to the top is by the most expedient means. And if that involves committing the odd crime of violence, he persuades himself that this is what successful people must do.

The story of the amoral protagonist at the centre of this fascinating narrative is, of course, what keeps the reader comprehensively gripped, but perhaps the real achievement of the book is in its picture of two Indias: the bleak, soul-destroying poverty of village life and the glittering prizes to be found in the big city. The book cleverly avoids fulfilling any of the expectations a potential reader might have -- except that of instructing and entertaining. The White Tiger will have many readers anxious to see what Adiga will do next. --Barry Forshaw

`Blazingly savage and brilliant... Not a single detail in this novel rings false or feels confected. The White Tiger is an excoriating piece of work... That it also manages to be suffused with mordant wit, modulating to clear-eyed pathos, means Adiga is going places as a writer.' -- Neel Mukherjee, Sunday Telegraph

'There is a new Muse stalking global narrative: brown, angry, hilarious, half-educated, rustic-urban, iconoclastic, paan-spitting, word-smithing... Adiga is a global Gorky, a modern Kipling who grew up, and grew up mad. The future of the novel lies here.' -- John Burdett, author of Bangkok 8

`Adiga's sharp, funny and angry book is a marvellous antidote to patronizing clichés about the exoticism of the Orient. Instead, his 21st century India is a disgusting place that stinks, swarms with people on the make and whose only redeeming feature seems to be the survival instinct that the amoral, irreverent Halwai has in buckets.' -- Tina Jackson, Metro (4 stars)

`Aravind Adiga's riveting, razor-sharp debut novel explores with wit and insight the realities of these two Indias, and reveals what happens when the inhabitants of one collude and then collide with those of the other... Halwai's voice - wised-up, mordant, sardonic, self-mocking and utterly without illusions - is as compelling as it is persuasive, and one of the triumphs of the book... His is a novel that has come not a moment too soon.' -- Soumya Bhattacharya, Independent

`Compelling, angry, and darkly humorous, The White Tiger is an unexpected journey into a new India. Aravind Adiga is a talent to watch.' -- Mohsin Hamid, Booker-shortlisted author of The Reluctant

`Dazzling... [The White Tiger]is an Indian novel that explodes the clichés... It's a thrilling ride through a global power... Brimming with idiosyncrasy, sarcastic, cunning, and often hilarious... Arch defenders of India's claim to be truly democratic, even-handedly prosperous and corruption-free (and these must be few outside of the Indian cabinet) might balk at The White Tiger. Everyone else, surely, will be seduced by it.' -- David Mattin, Independent

`Extraordinary and brilliant... Adiga is a real writer - that is to say, someone who forges an original voice and vision. There is the voice of Halwai - witty, pithy, ultimately psychopathic... Remarkable.' -- Adam Lively, Sunday Times

`In the grand illusions of a "rising" India, Aravind Adiga has found a subject Gogol might have envied. With remorselessly and delightfully mordant wit The White Tiger anatomises the fantastic cravings of the rich; it evokes, too, with startling accuracy and tenderness, the no less desperate struggles of the deprived.' -- Pankaj Mishra

`Unlike almost any other Indian novel you might have read in recent years, this page-turner offers a completely bald, angry, unadorned portrait of the county as seen from the bottom of the heap; there's not a sniff of saffron or a swirl of sari anywhere... The Indian tourist board won't be pleased, but you'll read it in a trice and find yourself gripped.' -- Andrew Holgate, Sunday Times

Book Description HARDCOVER. Condition: New. Dust Jacket Condition: New. 1st Edition. 1st printing. 8vo in black faux cloth, silver lettering to spine. 321pp. This copy signed by the author on the title-page (no other marks or inscriptions). With 'Shortlisted for the Booker Prize 2008' label to dust jacket (which it went on to win) . . . . . [ CONDITION : An extremely well preserved AS NEW unread and unmarked copy in an AS NEW complete Dust Jacket ] . . . . . . . . . We always ship in PROTECTIVE CARD PARCELS. Seller Inventory # T215230

Book Description HARDCOVER. Condition: New. Dust Jacket Condition: New. 1st Edition. 1st printing. 8vo in black faux cloth, silver lettering to spine. 321pp. This copy signed by the author on the title-page (no other marks or inscriptions). With 'Shortlisted for the Booker Prize 2008' label to dust jacket (which it went on to win) . . . . . [ CONDITION : An extremely well preserved AS NEW unread and unmarked copy in an AS NEW complete Dust Jacket ] . . . . . . . . . We always ship in PROTECTIVE CARD PARCELS. Seller Inventory # T215229