Items related to Rogue State: A Guide to the World's Only Superpower

William Blum Rogue State: A Guide to the World's Only Superpower

Rogue State: A Guide to the World's Only Superpower 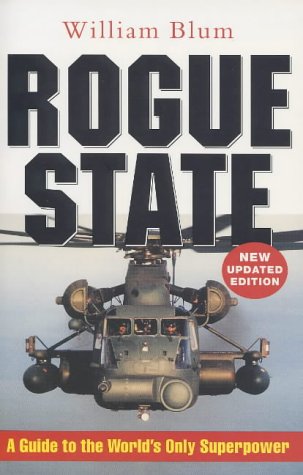 The American Empire: To the American mind, these words sound like an oxymoron. Suggesting to Americans that their country has a compelling lust for political, economic and military hegemony over the rest of the world, divorced from any moral considerations, is akin to telling them of one's UFO abduction - except that they're more likely to believe the abduction story. William Blum has compiled evidence that will make believers of such sceptics. In 'Rogue State', he shows that 'close encounters' between the United States and alien nations have demonstrably been of the cruellest kind.

'This is not a book for anyone who wishes to maintain any cosy illusions about their own liberty - let alone the liberty of anyone in any country to whose domestic policy the United States government takes exception... we find in these pages, meticulously detailed and annotated, all the instances of assassination, covert and overt destabilisation, election-rigging, sponsorship of terrorism, secret surveillance, brainwashing and provocation that the US has employed to further its burgeoning corporate empire (otherwise known as the the 'new world order')... After reading Rogue State, it is impossible to hang fast to the comforting illusion that the 'American Way' is some kind of enlightenment' - Will Self in The New Statesman ‘Rogue State is a book of charges to be tied to a paving stone and thrown at the men in Washington’ - The Independent on Sunday ‘William Blum, once of the US State Department, gives a chilling reminder that while there may be no justification for 11 September, there may be reasons’ - Mavis Cheek in The Observer, Books of the Year 2001 "Bravo! A vivid, well-aimed critique of the evils of US global interventionism, a superb antidote to officialdom's lies and propaganda." - Michael Parenti, author of 'History as Mystery' and 'To Kill a Nation: The Attack on Yugoslavia' "Blum demonstrates how US policy, under the banners of freedom and human rights, has led to barbarous criminal acts, how the world's 'force for peace' has acted in the most bellicose form. An eye-opener for students of national security policy." - Saul Landau, Fellow, Institute for Policy Studies, Washington, DC. "'Rogue State' forcibly reminds us of Vice President Agnew's immortal line: 'The United States, for all its faults, is still the greatest nation in the country.'" - Gore Vidal, author of 'The Decline and Fall of the American Empire' "Bill Blum came by his book title easily. He simply tested America by the same standards we use to judge other countries. The result is a bill of wrongs - an especially well-documented encyclopaedia of malfeasance, mendacity and mayhem that has been hypocritically carried out in the name of democracy by those whose only true love was power." - Sam Smith, Editor, 'The Progressive Review', Washington, DC 'In his recently released tape, Osama Bin Laden referred to Rogue State that seeks to explain why the US is sometimes a target of terrorists. The mention has catapulted Mr. Blum's book up to as high as No 21 on the Amazon bestseller list and in this country the mention has had an equally dramatic effect.' - Duncan Campbell, Guardian

William Blum left the State Department in 1967, abandoning his aspiration of becoming a Foreign Service Officer because of his opposition to what the US was doing in Vietnam. He then became a founder and editor of the Washington Free Press, the first 'alternative' newspaper in the capital. Mr Blum has been a freelance journalist in the US, Europe and South America. His stay in Chile in 1972-3, writing about the Allende government's 'socialist experiment', and then its tragic overthrow in a CIA-designed coup, instilled in him a personal involvement and an even more heightened interest in what his government was doing in various corners of the world. He is the author of 'Killing Hope: US Military and CIA Interventions Since World War II'.