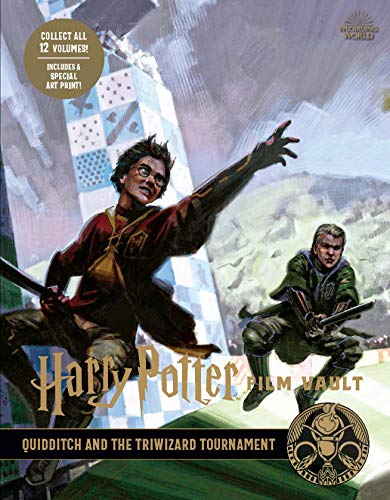 Harry Potter: The Film Vault compiles the filmmaking secrets and visionary artistry behind the Harry Potter films into a series of twelve deluxe collectible volumes. Each intricately designed book features gorgeous concept art and unit photography from the Warner Bros. archive paired with striking insights about bringing JK Rowling's Wizarding World to the big screen. In addition, a collectible poster accompanies each volume.

Jody Revenson is a seasoned writer with a background in the arts. Singer, composer, and performer. Student of popular culture, American and European history, architecture, photography, mixed-media crafts, comic books, mythology, illustration, and traveling. Author of Harry Potter The Creature Vault, Harry Potter The Book of Magical Places and Harry Potter The Character Vault, as well as several Disney titles.

2. Quidditch and the Triwizard Tournament

Book Description 2020. Hardcover. Condition: New. Hardcover. Discover the filmmaking secrets that brought the games and competitions of the Wizarding World to life on-screen. Get an in-depth look at Quidditch, the Wizarding World's favorite sport, a.Shipping may be from multiple locations in the US or from the UK, depending on stock availability. 64 pages. 0.640. Seller Inventory # 9781789094152