Items related to The Death of Stalin

The Death of Stalin 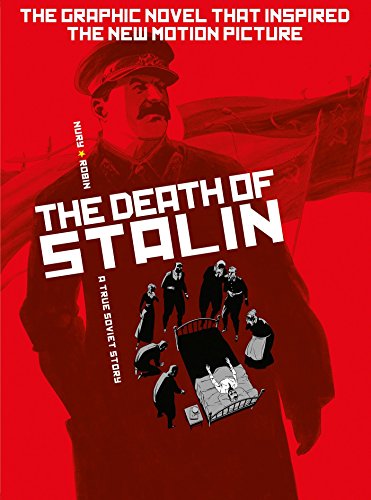 Fear, corruption and treachery abound in this political satire set in the aftermath of Stalin's death in the Soviet Union in 1953. When the leader of the Soviet Union, Joseph Stalin, has a stroke - the political gears begin to turn, plunging the super-state into darkness, uncertainty and near civil war. The struggle for supreme power will determine the fate of the nation and of the world., And it all really happened.

"Within minutes of starting to read the graphic novel, I knew I wanted to make the movie version." - Armando Iannucci, writer/director (The Death of Stalin, Veep, In The Loop, The Thick of It)

"Read the Death of Stalin and just loved it. I started laughing the moment he died!" - David Mandel, showrunner of HBO's Veep, writer of Curb Your Enthusiasm, Seinfeld, and SNL "Oozing with sleazy, appalling chicanery, the narrative by writer Nury (I Am Legion) and artist Robin (Death to the Tsar) captures a turbulent and disturbing period with solid visual storytelling. Robin depicts the sordid goings-on with elegant caricatures that give a clear view of the complete and utter awfulness of the cast, adding enough historical flair to nail down the era. It's proof of the theory that tragedy plus time equals (very dark) comedy." - Publishers Weekly "Juicy and engrossing, this story speaks of a style in political machinations going back centuries and inspiring both revulsion and twisted admiration." - Library Journal "It's a fun take on history that'll have you researching what's true and what's close to the truth. But the key is, through all the weird, the story is beyond entertaining. 9 out of 10" - Graphic Policy "One of the better political comedies to grace the comics page in recent years... expertly handled by writer Fabien Nury and artists Theirry Robin and Lorien Aureyre" - Vulture "If you like scathing black comedy with a lot on its mind, you can't do better than The Death of Stalin. 9 out of 10" - Capeless Crusader It doesn't matter if you're into historical events, everyone needs to pick this novel up." - Yelling About Comics "An entertaining novel" - Flickering Myth "A wonderful political thriller with some insight to the state of the USSR at the time of Stalin's death" - Rogues Portal "A fascinating examination of insanity and treachery" - Multiversity Comics "The book is visually striking and unexpectedly cinematic" - Shelf Abuse "A fantastic, satirical take on the course of events." - Grovel About the Author:

Fabien Nury Born in France in 1976, Fabien Nury is a critically acclaimed comics writer. Thierry Robin - Born in 1958 in Damery, Thierry Robin was first introduced to comics while attending the School of Fine Arts in Reims. His partnership with Fabien Nury has garnered critical and commercial success, first with The Death of Stalin and subsequently The Death of The Tsar.

2. The Death of Stalin

3. The Death of Stalin

4. The Death of Stalin

5. The Death of Stalin

6. The Death of Stalin

7. The Death of Stalin

8. The Death of Stalin

9. The Death of Stalin